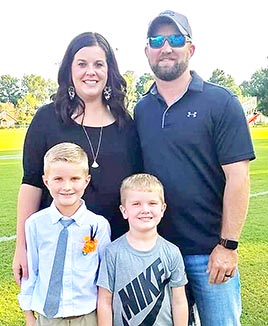 The home of Jordan and Lacy Yeley of Gleason was destroyed in a late Saturday night fire. Gleason City Hall is hosting a toy drive for the children, Colin and Brennen. Monetary donations, as well as gift cards, are also being accepted for the family.

GLEASON (February 27) — A Gleason family’s home burned to the ground over the weekend, leaving them with nothing but the clothes on their backs.

Jordan and Lacy Yeley of Gleason, along with their two children and Lacy’s mother, Donna Arnold, lost their home and all of their possessions in the fire.

According to official reports, the Weakley County 911 office received a call at 7:06 p.m. Saturday, February 27, reporting a fire at a two-story residence on Janes Mill Road, Gleason

Como/Ore Springs Fire Department was dispatched to the blaze, which was fully involved when they arrived at the scene.

Mutual aid was provided by Gleason, Greenfield and Palmersville fire departments, which helped shuttle tankers filled with water to the rural home and provided manpower in an attempt to extinguish the flames.

Firefighters also had to contend with preventing a propane tank behind the house from getting too hot and exploding while fighting the house fire.

The fire was under control Sunday at 12:16 a.m. and firefighters cleared the scene.

Although their house was a total loss, the family was not home at the time and no one was injured.

Lightning is the believed cause of the fire with the short line of storms that moved through the area Saturday evening.

The Yeley family is receiving prayers and donations from their local community.

Gleason City Hall is hosting a fund drive for the Yeley family. Anyone who would like to donate can do so through Venmo to Lacy’s account @Lacy-Yeley https://venmo.com/. Donations, including gift cards, may also be brought to Gleason City Hall during normal business hours. If anyone has anything else to donate, it can also be dropped of there as well. Mayor Charles Anderson will see that all donations get to the family. A ledger of monetary donations will be presented to the family. Additionally, Gleason City Hall is having a toy drive for the children.