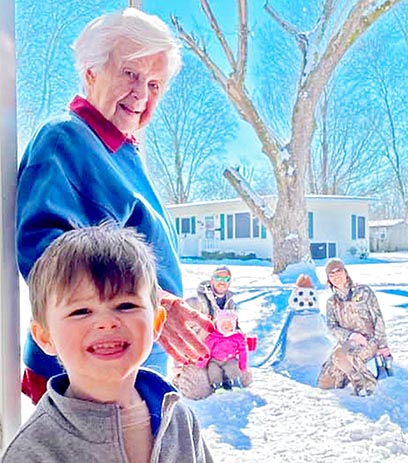 Brittany and Adam Bennett, along with their son, Nash, and daughter, Lonnie, built a snowman for Mrs. Margaret Porter of Greenfield. Although the Bennett family didn’t know the 90-year-old, after seeing the Facebook post, they generously gave of their time and energy to make the day special for the Greenfield senior. Nash named the snowman Olaf, which is a cartoon character in the movie Frozen.

GREENFIELD (February 23) — On Friday, Karen Campbell of Greenfield, who cares for her 90-year-old mother, Margaret Porter, noticed her mom was spending a lot of time looking out her window at the falling snow.

Karen, who works as Communications Director at Weakley County Schools, stated her mom always enjoyed playing in the snow as a child and it’s never lost its wonder.

“I noticed she was mesmerized, and I thought, wouldn’t it be cool if somebody built her a snowman,” Karen said. So, she sent out a Facebook post stating ‘Free Snow for the Taking’ hoping people would get the joke, and read the rest of the message.

On Friday, Karen immediately got a response from her neighbor, Mary Valentine, so Karen and Mary built the first snowman.

“We didn’t know Brittany and Adam Bennett, but out of the goodness of their hearts, they brought their kids over, along with sort of a snowman-to-go-kit complete with coal and carrots, and built a snowman for her,” Karen said. “So, we invited them in, and mom got to spend some time with the kids. It was just a fun afternoon.”

Karen explained, the Bennetts got tagged and saw the post on their cell phone, while they were playing in the snow in Martin. They came to Mrs. Porter’s residence and built a snowman, then they went to Gleason to play in the snow some more with family.

Ultimately, over 200 people from around the world responded favorably to the photos as the day unfolded.

“People kept sharing it and liking it and asking questions about it,” Karen said.

“It was a real special day for her.”

“We appreciate everybody’s enthusiasm for it. It really did make her week. People were so supportive, either online or in person.”

Many local citizens may remember Mrs. Porter, who spent her entire working career at the Porter Clinic in Greenfield.