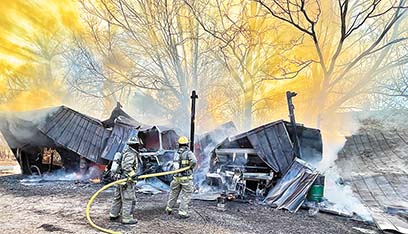 MARTIN (January 29) — A fire that broke out inside a tool shed in rural Weakley County Friday afternoon destroyed much of its contents, including assorted pieces of farming equipment.

At approximately 4:20 p.m., January 30, the Martin Fire Department was notified a farming implement storage shed was ablaze at 994 Mathis Rd. between Martin and Dresden.

The Martin Fire Department responded to the scene with eight firefighters and three apparatus.

Dresden Fire Department, which was paged out to provide mutual aid, sent five personnel and two pieces of firefighting equipment.

Sharon Fire Department provided mutual aid by manning the Martin fire station and covering the City of Martin, while Martin and Dresden firefighters fought to extinguish the flames.

Assistant Martin Fire Chief David Gingras estimates the size of the building to be 50 feet by 100 feet.

Assistant Chief Gingras said several tractors and other pieces of farming equipment were burned up in the fire, including a cattle trailer and seed drill.

The property owner, Dennis Simmons, told firefighters he believes his tractor caught fire and spread to the rest of the building.

It took firefighters approximately two hours to extinguish the fire and clear the scene.