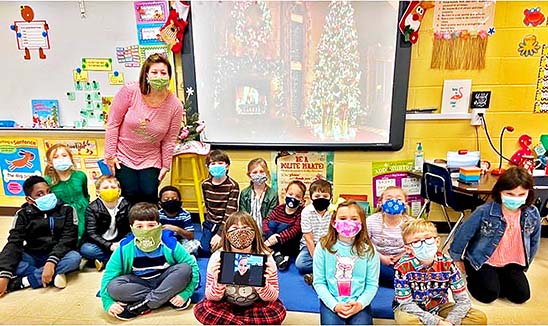 Alessia Cortese was at an outdoor café in Italy when she spoke with the children. They were able to see some beautiful Christmas lights behind her as she shared the story of La Befana, an old woman who delivers gifts to children throughout Italy on Epiphany Eve (the night of January 5) in a similar way to St. Nicholas or Santa Claus.

MARTIN (January 26) – Students have often had worlds unlocked through the pages of a book, but during the pandemic they are finding the keys to new information and experiences are also available via technology.

A great example of that is Allison Stockton’s first-graders at Martin Primary, who spent the last two weeks of 2020 traveling the world, learning about other countries’ traditions and how they celebrate the holidays. Africa, Canada, England, France, Germany, Israel, Italy, Mexico and Russia were all on the itinerary.

After packing their brains with knowledge of holiday traditions, Stockton, with the aid of her parents,

Betsy and Ronnie Albright of Clarksville, virtually “soared” over the seas to introduce the children to new friends from Germany/Austria, Italy and Canada via video chats. The Albrights drew on friendships through Fort Campbell and particularly, neighbors Elizabeth and John Hardwick, who jumped at the opportunity to foster learning.

“They [students] amazed me with the questions they came up with to ask each person and the discussions it sparked,” shared Stockton on a social media post. “My kiddos could hardly believe they were talking to people all the way across the ocean and then to someone who was right above us and completely covered in snow!”

Those “right above” the students were Bobbi and Ira Maxwell of Nova Scotia. Grandparents of first-grader Maclin Moore and parents of Nicki Moore, another MPS teacher, they read a story about their village and took the children out in the snow with their camera.

Other calls were made to friends of the Hardwicks, such as Claudia Schattwick and her daughter Constanze in Germany.

“Claudia told us all about German Christmas traditions, taught us some cool new words and took us outside so that we could see Germany,” Stockton wrote on Facebook. “She showed us her Advent calendar and Advent candles that were just beautiful! Constanze lives in Austria and works at the museum is Vienna. She shared with us about some of the Austrian Christmas traditions. It was so fun to talk with them!”

When the children met Alessia Cortese from Italy, she told them about some of the Italian Christmas traditions and helped them learn to say “Buon Natale,” which is Merry Christmas in Italian. Weeks after their experience, when asked what they learned, the students were able to shout the greeting and then go on to explain about La Befana, the Christmas witch, who is treated to wine and biscuits on Christmas Eve rather than milk and cookies.

Stockton searched for ways to fill the void left during the social-distancing protocols, which prohibit classroom visits such as the weekly community leaders reading to the class. The video calls have translated into an ideal opportunity. Stockton’s father, a recently-retired teacher, and her mother, not only shared a book they once read to their daughter, they also helped her navigate the technology required to accomplish the calls over various networks and time zones.

Stockton said she was especially thankful of the Charger Foundation’s recent gift of iPads to the school as hers made one of the connections much smoother.

“This is one of those super cool teacher moments that I will always remember and I sure hope they do too!” concluded Stockton.