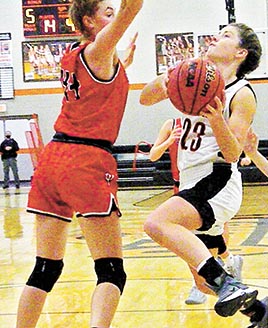 Edie Darby (R) of Greenfield and Rebecca Walter of Bradford

GREENFIELD (January 15) – Greenfield hosted Bradford Friday night in a pair of district basketball games. The Lady Jackets led throughout their game to finish with a 47-38 win, while the boys fell to the Red Devils 68-56.

Greenfield continued to break through Bradford’s defense to make 12 points before the halftime. This brought the score to 21-14.

Coming out of the half, Caroline Crouse shot a pair of three-point shots, along with Reese Biggs and Edie Darby shooting for three, which helped to increase the Lady Jackets lead by 15 points. Bradford struggled to meet the net. As the game entered the fourth quarter, Greenfield held on to its lead over Bradford 36-22.

Edie Darby led Greenfield in the last quarter with five points. The Bradford offense was able to break through Greenfield’s defense to score 16 points. But the Lady Jackets were able to hold on to their lead that was set earlier in the game as the fourth quarter ended with Greenfield winning 47-38.

Darby led Greenfield with the most points at 16. Biggs earned nine and Crouse scored eight. Each player scored a pair of threes in the game.

Greenfield’s defense struggled to hold Bradford back and the offensive side scored only 13 points. Six of those points were from the free-throw line and the Jackets fell behind at the half by a score of 38-18.

Coming out of the half, the Jackets’ defense made a push back at Bradford, fighting for the ball. This push by Greenfield had the Red Devils score only six points in the third quarter. On the other side of the ball, the Jackets’ offense was better as it picked up 14 points. Kire Tribble had four points, while Matt Scates and Barkley Biggs made three-point shots. Going into the final quarter, Greenfield was behind by only 12 points, and it seemed that the Jackets might be able to take the lead from Bradford.

However, the Jackets’ defense was unable to hold back Bradford as they did in the third quarter. Multiple fouls by Greenfield gave Bradford seven points from the free-throw line. This, combined with multiple other points, gave Bradford an additional 21 points. All the while Greenfield’s offense was improving, led by Kobe Thomas with six points, but it was not enough to pull Greenfield into the lead. The Jackets made 27 points in the final quarter, but still fell to Bradford 68-56.

Leading for Greenfield in points was Luke Stone, who scored 12 including a pair of threes. Kobe Thomas scored 10 points. Omarion Miles and Kire Tribble shot for nine. 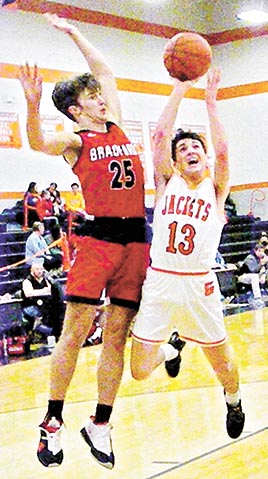