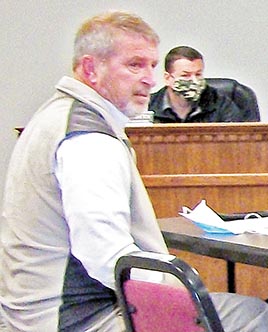 DRESDEN (January 8) — Members of the Public Safety Committee considered several important issues dealing with the Weakley County Sheriff’s Department when they met on Friday, January 8, in the School Board Conference Room.

Weakley County Sheriff Mike Wilson stated his department transports 50-60 inmates per year to mental medical facilities at either Lake Haven in Memphis or Bolivar. This costs the county approximately $800 per round trip. The private insurance of the inmates pays for their trip to a mental health facility, while the sheriff’s department pays for transporting those without insurance.

“The sheriff’s department shouldn’t be transporting patients,” Sheriff Wilson said. He noted the state wants sheriff’s departments to employ one of two methods for transporting the inmates. One is to send all of the officers to an eight-hour class to learn how to deal with mental health patients and transport the inmates in unmarked vehicles driven by officers in plain clothes. The other is to contract a patient transportation company to provide the service.

“I need all of my officers,” Sheriff Wilson said.

He explained Tennessee state law allows for sheriffs to appoint a secondary unit to handle all mental health transportation, and Weakley County has entered into an agreement with Amerimed Services. The cost for the service will be paid out of the $18,828 grant.

Sheriff Wilson stated it is his hope Amerimed Services will establish a hub near Weakley County, once sheriff’s offices in surrounding counties sign on for the patient transportation service. Presently, Amerimed must drive from Memphis to transport patients requiring mental evaluation and treatment.

Sheriff Wilson replied he spoke with Weakley County Attorney Allison Whitledge and the contracting agency bears the responsibility for any liability issues.

According to Wilson, it is his understanding Weakley County will be able to apply for funding again next year.

The committee agreed to appoint a line item for revenue and expenditures to budget the grant funding.

Sheriff Wilson stated correctional officers are required to conduct hourly safety checks on inmates, which are logged in at individual stations by the officer, noting the date, time and signature of the officer. The log is currently maintained with handwritten entries. He noted a weakness in the system is that officers can backdate their paper logbooks if they get behind and fail to check on the inmates within the specified time.

According to Wilson, Life Check Systems provides equipment and software to document hourly safety checks. There are “tags” placed throughout the jail, which are used in conjunction with devices similar to cell phones, that log the date and time officers check on inmates. The device is also capable of taking photos, if necessary. Wilson explained this is very beneficial, especially if an inmate is on suicide watch, which may require checks every 15 minutes.

Commissioner James Roy Pope expressed concerns the one-year contract could be increased upon renewal.  However, he favored it because it transfers liability to the service company.

The sheriff stated it is necessary to create an expenditure line in the budget.

The committee accepted the proposal, which according to Finance Director John Liggett, could be funded without transferring money from another account.

Sheriff Wilson stated his department is in need of an updated policy and procedure manual, which has not been rewritten since 1982.

He explained, due to complexity of ever-changing laws and liability issues, he is not qualified to write such a manual, and a law firm specializing in writing and continually updating the policy manual to keep up with changing laws and regulations, is needed. Sheriff Wilson said, when he asked Whitledge about performing the policy manual update, she said she can refer him to attorneys that do that.

Sheriff Wilson said, “Just recently, in Tennessee, we’ve had to revise our use of force and other policies.” He mentioned eliminating the chokehold as an example.

He stated there are law firms specializing in revising policy manuals for law enforcement agencies and continuously monitoring case law and liability issues in order to keep the manual current.

His mentioned one such firm offered to totally revise the Weakley County Sheriff’s Department’s Policy and Procedure Manual for $14,000 and update the manual for an annual fee of $11,000.

Committee Chairman Jack Vincent suggested looking into modeling a policy manual based on another rural Tennessee county that has recently revised its policies.

Commissioner Pope inquired if it would be possible to receive assistance in re-writing the Sheriff’s Department’s policy and procedure manual from the Tennessee Sheriff’s Association or CTAS.

“CTAS is a big benefit to the county, but they’re not going to come in and write your policy and procedure manual,” Sheriff Wilson said. “They’re just not going to do it.”

Commissioner Hawks stated, if anybody but a lawyer writes the policy, it won’t stand up in court. When it goes before a judge, they’d say, well, a lawyer wrote it. It must be right. They’re not going to let the Sheriff or anybody else put it together, because a lawyer’s not doing it. One way or another, the lawyers are going to get their hands in it. That’s the bottom line.”

“I just think there may be other options we can take a look at,” Commissioner Pope said.

Commissioner David Bell said, “Fourteen thousand to re-write the policy and make it current seems okay to me, to make it defendable.” However, he suggested it might be possible to have the county attorney keep the manual updated, once it is rewritten.

Sheriff Wilson said, “You need the people who are going to defend you to write the policy.”

He stated there is money in his budget to cover the cost for the service.

“I ask we have the county attorney look at this and get a straight, on the record, answer from her for sure, whether she can or cannot do this,” Commissioner Pope said.

Commissioner Hawks made a motion to table the issue until the committee’s March meeting, in order to give County Attorney Whitledge time to research the issue. The motion was unanimously approved.

Under old business, Weakley County Mayor Jake Bynum informed the committee there is nothing Weakley County can do to stop the odor problems reported by residents in the vicinity of large commercial chicken production operations. He noted County Attorney Whitledge determined the only way these citizens can seek relief regarding the situation is in Weakley County Chancery Court.

During a coronavirus update, Mayor Bynum stated, as of Thursday, 3,256 Weakley County citizens either had or currently have COVID-19, which amounts to approximately 10 percent of the total population. He stated there were more than 800 new cases during the month of December, which averages 27 new cases per day. January 2021 is averaging 26 new cases per day. More than 600 people are on the waiting list to receive their vaccination. “We calculate 2.6 percent of Weakley Countians have received their first shot,” Mayor Bynum said. He stated frontline workers, such as emergency personnel and teachers, as well as high-risk citizens in long-term health facilities, are at the top of the list to receive vaccinations as they become available.  He added, Johnson & Johnson has developed a one-shot vaccine that will hopefully become available in the United States by February.