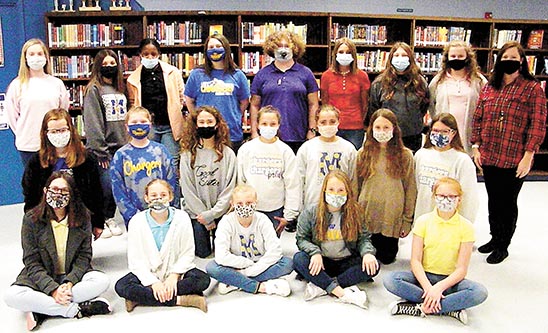 MARTIN (December 7) – The Publication Club at Martin Middle School began a first-of-its-kind new project that features students at school reporting the most recent information in the school with a news series dubbed, “The Charger News.”

On Monday, December 7, the Publication Club uploaded its first video of the Charger News onto YouTube.

The first episode included information on the rise of COVID-19 cases in Weakley County. The students talked about how citizens can be kind to local healthcare workers and small businesses and provided updates on clubs and sports for the Martin school. They highlighted recent games and provided scores. The first episode ended with jokes given by students.

The Club has planned to have the Charger News posted each Monday via YouTube and if the students get too busy with schoolwork and other activities, it could be moved to a biweekly posting.

The club used cell phones to record video and divided into groups and worked together to get different segments the newscast had written ready for the recording. Librarian Stephanie Virgin, the sponsor of the Publication Club, said that this project started when the club wanted to start publishing news and the idea of doing a weekly news show came up. The students became very excited and wanted to do as much as they could without help from teachers. The students divided into groups, picked topics to talk about, some wrote the scripts and some helped to edit the final video.

President of the Publication Club, Sadie Bell said this about the Charger News, “It’s been an experience that opens up a new world of technology.” Vice President Ara Winstead commented, “It’s a lot of fun and brought a lot of people together.”

Virgin has said the club has worked together well and saw many students step up into leadership positions because of this project. She also noted she was excited that students were able to learn about this at such an early age and that it could inspire some to go into a broadcasting career.

The club has been learning a lot about teamwork, setting goals, making deadlines and public speaking.

Virgin noted how much support the community has already given the “Charger News” outlet. The Charger Foundation donated money to the library, which was used for new sound equipment for the club. Weakley County Schools Communications Director Karen Campbell also stopped by the school to talk to the club about editing their scripts and how to grab readers’ attention.

Outside of the “Charger News,” the Publication Club also helps at the library and with the school yearbook. The club does hope to have a weather team in the future.

This is a weekly show posted on the Martin Middle School News’ YouTube page.