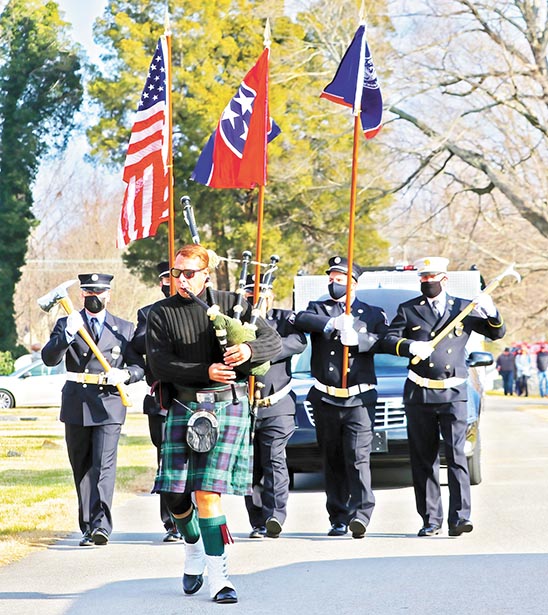 DRESDEN (December 17) – On Thursday, December 17, emergency medical response vehicles from Weakley and surrounding counties gathered to escort the funeral precession of the Bobby Greer, who died of complications from COVID-19 on Sunday, December 12. A large American flag, displayed by the Martin and Milan fire departments was draped across Highway 22 in Dresden, which the precession passed under. Greer was an Advanced Emergency Medical Technician for the Weakley County Ambulance Service and Rescue Squad. He served for 16 years as a first responder in the county. Emergency personnel lined Sunset Cemetery during the funeral service as they said goodbye to one of their own that afternoon. Bagpipes, a Color Guard and ambulances led the procession into the Dresden cemetery. Along with the many emergency response vehicles on hand for the Dresden AEMT’s services, Greer’s last page was also sent out over the scanner Thursday, December 17, noting his mission was fulfilled. Bobby Greer leaves behind a wife, Christie, and three children. An account has been set up for the Greer family at Simmons Bank. Donations can be made at any of the Simmons branches under the note, Greer Account.