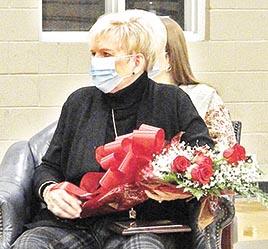 DRESDEN (December 13) – Select family, friends and co-workers gathered at Dresden Middle School Sunday afternoon for a special ceremony honoring Leigh Hart for her many years of dedication to athletics and as a mentor for so many students. This ceremony not only thanked Hart; it was used to unveil the most recent update to Dresden Middle School gym. The gym was dedicated to Hart and will be known as The Leigh Avery Hart Basketball Court.

The ceremony began with principal of Dresden Middle School David Lewellen welcoming those in attendance. He thanked the people who helped begin the process of having the basketball court named after Hart. They included Lin Dunn, Melissa Overton and Josh Moore.

Director of Weakley County Schools Randy Frazier spoke next about Hart. He spoke about how important Leigh Hart is to the community and her impact on schools. He also said, “I don’t know anyone who deserves this more.”

Bettye Giles with the Tennessee Sports Hall of Fame was scheduled to speak about Hart’s early years, but due to unforeseen circumstances, she was unable to attend. Frazier spoke instead.

In 1977, then Leigh Avery came to UT-Martin as a student and played basketball, tennis and was very involved in many student activities. In 1981, she was recognized as the Outstanding Female Student of the Department of Health and Physical Education and school of education at UT-Martin.

Beginning her long career working with Dresden athletics, she was the director of the girl’s softball with the Parks and Recreation. She did this for three years and after graduation she started working for Dresden Junior High.

Assistant Director Jeff Kelley followed by going more into Leigh Hart’s life and her impact. He told how he was a student with Leigh and said that as long as he has known her, she has also been a fierce competitor. He said she is someone you always want on your team.

Kelley noted she is the daughter of Mary Margaret Avery and the late Dr. Thomas Lee Avery. She is married to Dickie Hart; stepmother of Andrew Hart; mother of Haley Hart and grandmother of Avery and Anna. She was a student and graduate of Bartlett High School and the University of Tennessee at Martin. She has taught in Weakley County since 1982. Hart was the girls’ basketball coach for Dresden Middle School from 1982 to 1984 and then again from 1999 to 2019. During that time, her team won five Weakley County championships. She was the coach of Dresden Middle softball from 2006 to 2010. Hart also served as the director of Dresden summer softball in 1980, 1981 and 1983, 1984. She was the Jump Rope for Heart Coordinator from 1984 to 1989, where money was raised for the American Heart Association. Hart served as Dresden Middle’s Beta Club sponsor from 2007 to 2019 and Dresden Middle yearbook sponsor from 1982 to 2001. She was the co-founder of the Dresden Middle Lion’s Den student reward store. She served as the Tennessee Iris Festival Road Race coordinator for nine years.

Kelley then went on to say this about Leigh Hart, “What a resume. I went back and I underlined the descriptors. I want to run through those real quick. Descriptors of Leigh Avery Hart: daughter, wife, mother, stepmother, grandmother, sister, student, graduate, teacher, coach, director, coordinator, sponsor, co-founder, torchbearer, volunteer, child advocate, citizen, neighbor, honorary chair. All of those describe Leigh Hart.” Kelley also noted that when Leigh Hart does anything, she tries to be the very best at it. But he said that most of all, she has been a friend to all of the students and co-workers who have been in Dresden Middle School during all of her years there.

After this, Hart was presented with a new design for the Dresden Middle School basketball coach, which is being named in her honor as the Leigh Avery Hart Court.

City of Dresden Mayor Jeff Washburn also spoke about Coach Hart. He announced he had already given her a key to the city and decided to give a proclamation, which named December 13, 2020, as Leigh Avery Hart Day for her constant dedication to Weakley County students and athletics. He also presented a gift to Hart from the workers of the City of Dresden.

Hart had written down some thoughts for the ceremony and had Jennifer Schlicht speak on her behalf. She wrote how thankful she was for the constant support of those in the community. “A few weeks ago, I posted on social media how I got so lucky and reflected on all my blessings. To be a part of a wonderful family who taught me values, the importance of a strong work ethic and kindness towards others,” she wrote. “Later to be blessed with a family of my own. To be blessed with Sunday school teachers, teachers … In 1980 my journey brought me to Dresden where I had the opportunity of summer employment with the softball program. After graduating from college, I entered in as a young college graduate. A little wet behind the ears, a little too independent, and hard-headed at times, it helped me find my way. I love being in the classroom, but my real passion was basketball. I spent many hours on the court pushing and pushing and having real fun and helping young women know their worth and become mentally tough and be equipped to go out into the world and know that anything is possible and for them to grow and build their journey. The past 23 months have been tough, but by the grace of God and all who have been a part of my journey and lifted me up in prayers, I am still here, considering every day a blessing. Someone that I would consider a mentor is the late Pate Summit, (who said) ‘You win in life with people’ and boy did I hit the jackpot.”

Two former students and basketball players under Leigh Hart, Alex Sledd and Callen Killebrew, spoke about her impact on their lives. Killebrew said, “Coach Hart has always been a role model in my life. I did play for her for four years and I owe it all to her for teaching me to be mentally tough.”

Sledd said, “Especially when I went off to college, I was ready to give up and quit and I remembered I had that same feeling in freshmen year of high school. I came to Coach Hart in the middle school and she said, ‘Alex you are better than this and you can do this. If they hit hard, you never quit. That’s what I taught you and you need to keep pushing through.’ And every day in life I always remember that. When I feel like giving up when things are hard, Coach Hart never gives up.”

Melissa Overton, one of the people behind the petition to have the basketball court named after Leigh Hart shared Coach Lin Dunn had the idea and she thought it was a great idea, but they knew there was a rule that courts could not be named until someone had passed. Overton contacted Director Frazier and asked how they could have the court named after her now so that friends and family could gather and celebrate with Hart.

“So glad we could do this. She has been a mentor to me and to numerous teachers that have taught here in the middle school and junior high. She started teaching when I was just a student and I got to know her because I was a student first and later on, when I was a teacher, she was one of my mentors.” Principal of Dresden Middle School David Lewellen said.

Hart has had an impact on the lives of local youth. People can travel the streets of Dresden and throughout the entire county and they will find stories of Leigh Hart touching lives through her teaching, coaching and philanthropy. Leigh Hart listens with her heart. She has a genuine love for people, taking an interest in lives and impacting many. While offering encouragement and leading by example, she has a gift for allowing people to see the potential in themselves. Her impact has reached far and wide, making others live better and be better. Many can be sure that none of her students go a day without her constant support, love and hope.

Director of Weakley County Schools Randy Frazier shows Leigh Hart the new design of the Dresden Middle School basketball court, which was renamed in her honor.