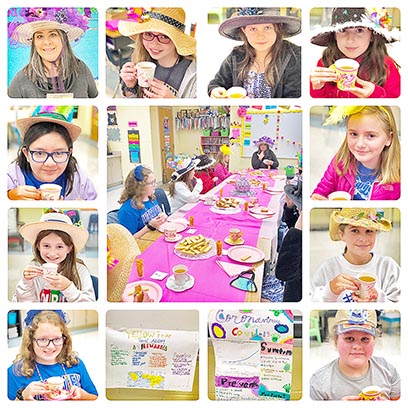 Martin Elementary School’s Jessica Fortner helps books come to life for the readers assigned to her enrichment classes. At a recent tea party she hosted, students donned both hats and personas to “gossip” about the goings-on in 1793 Philadelphia. The readers gained the knowledge of the times from “Fever 1793,” a work of historical fiction by award-winning author Laurie Halse Anderson. Participating in the tea party were (Clockwise from Fortner) Blaire Baker, Erin Crawford, Alyssa Cathey, Ella Pinkston, Rainsley Alexander, Ellie Freeman, Madi Adcock, Kella Simmons and Emma Munoz. Colin Stroh was absent on the day of the tea party, but helped with the Public Service Announcements.

“Miss Emma Blanks welcomed nine of her neighbors into her Philadelphia home last Friday for a tea setting that included vanilla wafers, PB&J sandwiches, goldfish crackers and apple juice. The lavish spread was laid out on her grand dining table decorated with seasonal produce and draped in pink to match the floral tea set. The socialites enjoyed the refreshments while recounting the happenings about town as the city continues to suffer through the yellow fever epidemic.”

Education pages of today would translate the above as follows:

“Martin Elementary’s Jessica Fortner has turned studying a best-selling historical fiction novel for teens into experiential-learning activities that have students connecting the page-turner to today’s COVID-19 crisis. Fifth-grade enrichment readers have thus far crafted a public service campaign, including print and radio spots focused on precautions for avoiding contact with the virus. They’ve also taken on personas of the late 1700s and “gossiped” at a tea party setup in a school classroom to review ‘Fever 1793,’ by award-winning author Laurie Halse Anderson.”

The class is reading the book together and are often left with cliffhangers as to what exactly will happen next to their protagonist, Mattie Cook, who lives above the family coffee shop with her widowed mother and grandfather in hard-hit Philadelphia. To capture the attention and imaginations of the class, Fortner assumed the role of Miss Banks and invited her students to create their own characters for a “gossip” session that allowed for a review of what had been learned thus far at the book’s midway point.

The 10- and 11-year-olds drew on what they knew from the novel to answer questions from “Miss Blanks” such as, “Who knows someone who has the fever? What are their symptoms? What are the treatments? Are you doing anything to avoid catching it? Whatever shall we do?”

The “gossip” reflected that Mattie, her mother and grandfather had contracted the disease, along with other residents both young and old.

“My great aunt has sadly passed away from it,” said one guest. “She lived out in the country so we could not arrive in time to grieve her.”

Incorporating more language of the day, the party “guests” spoke of President Washington returning to Virginia so that he “doesn’t fall ill;” the “dreadful” symptoms of turning yellow and vomiting blood; and calling the doctor’s treatment of lancing arms to see if the fever was in the blood as a “horrid” act. One even called the fever “balderdash.”

In response to what they could do, the students left the confines of the page and began to collaborate on an escape plan that came solely from their imaginations. After one guest offered her family home in the country for all to wait out the fever, another suggested she had a horse, but no carriage while another had a carriage, but no horse.

The party concluded with the emotionally-exhausted host saying goodbye to her friends and taking to her bed for a nap.

As students discussed the experience afterwards, they all praised the opportunity to use different accents and vocabulary.

“I’ve never done anything like this before,” said one and all immediately agreed.

Since, at this point in their reading, Mattie is currently staying at the morgue due to an error in assessing her situation, the readers are eager to know what happens next.

Principal Patresa Rogers, who observed the tea party from across the room, asked the students, “How many want to read ahead?”

Every reader raised a hand.

Next up was taping the student-written public service announcements at Thunderbolt Radio. Kevin Bartholomew Fortner, production director, captured the young voices enthusiastically delivering COVID-focused guidance, such as the importance of wearing masks to help avoid the virus. Leatha McCroskey, director of business development, helped those waiting for their time at the microphone understand the broadcasting entity’s long history in the community.

Fortner has other experiences planned for the days ahead, including a weekend exploration of Martin’s own yellow fever cemetery.

“Jessica Fortner is an outstanding reading teacher,” noted Terri Stephenson, Weakley County’s Supervisor of Elementary Instruction, after seeing photos of the tea party. “She is exactly who our enrichment readers need to challenge them to the next level of reading competency. I’m grateful we have teachers of her caliber at our schools.”