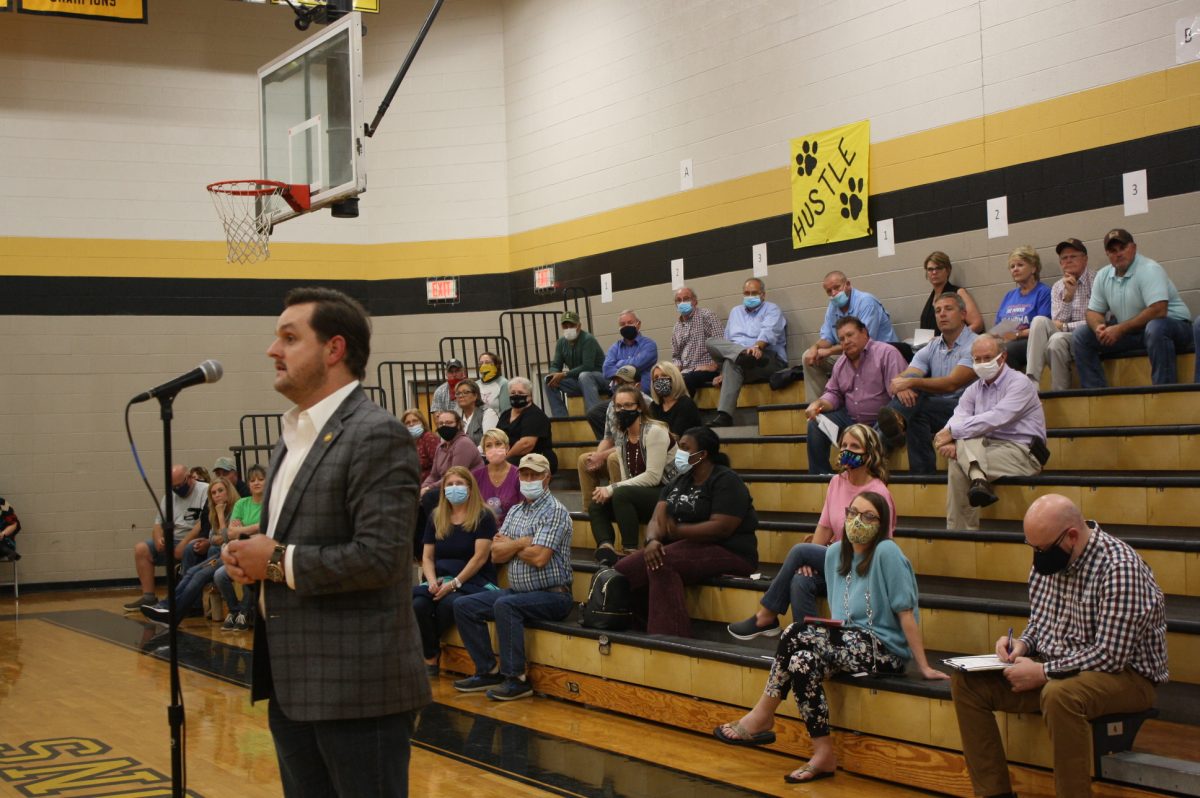 Weakley County business owner Alex Bynum addressed the Weakley County Fiber Research Committee Monday evening in the gym of the Dresden Middle School as an advocate for a fiber infrastructure project partnership between the county and West Kentucky and Tennessee Telecommunications that would bring high-speed internet to all rural parts of Weakley County.

DRESDEN (November 9) – The topic of high-speed internet access for rural areas of Weakley County remains, at the forefront for the Weakley County Fiber Research Committee as board members agreed to once again, present a resolution that would allocate funding from the county, along with West Kentucky and Tennessee Telecommunications (WK&T), to build out fiber throughout the unincorporated parts of the county for rural residents.

After hearing discussion from several members of the rural community, many for the project that was a topic of a public meeting last month, and educational and business leaders, the Fiber Research Committee passed the resolution during Monday night’s meeting held in the Dresden Middle School gymnasium.

The cost of the proposed project is $10.5 million, with the county allocating that in funding and WK&T matching those funds. The proposal was struck down by the full body of the Weakley County Commission last month.

Committee member and District 1 Commissioner Dennis Doster said the purpose of Monday’s evening was to shed light on misinformation circulating surrounding the internet proposal. Doster explained the county is not looking to increase property taxes to pay for the proposed project. Weakley County’s portion of the funding would not be due for the project until Fiscal Year 2024-25 and the county would potentially have $4-6 million to put toward projects in the future.

“Internet is one of the most important things we are going to discuss in the future. We have a unique opportunity to get fiber throughout Weakley County,” Doster said.

Several speakers addressed the committee, while members of rural areas of Weakley County, along with county commissioners were on hand for the meeting.

Among the speakers was Weakley County Director of Schools Randy Frazier, who explained students of the System experienced a loss of learning in March when the governor called for school closures due to the COVDI-19 pandemic.

The director said the System was scrambling to find resources to continue educating children who weren’t in the classroom, while seeing some of the faculty have to go into the school buildings as they lacked access to reliable internet.

He said his biggest concern with the project was the affordability for families in the county as 55 percent of students are on the free and reduced lunch program.

Weakley County School Board Chairman Steve Vantrease reiterated Frazier’s sentiments on the need for high-speed internet access for Weakley Countians. He said the Board’s goal is to provide a quality education for all students in Weakley County, for them to compete on not just a state level, but a national level as well.

Weakley County Economic Development Director Shelby Spurgeon stressed broadband is just as important for infrastructure and the county runs the risk of falling behind. Through her department and a partnership with Tennessee Valley Authority, a remote-work program is in place for those looking to work from home. By having access to high-speed internet, people in Weakley County can reside in the county, but work in urban settings. Spurgeon said broadband increases property values by three percent and makes the county more marketable for potential businesses and corporations.

Fiber Committee Chairman and District 6 Commissioner David Bell said the county has even seen an increase in sales tax revenue as a result of internet sales within the last year by $40,000. Based on shipping zip codes, sales taxes showed an increase in unincorporated areas, emphasizing high-speed internet is a good investment for the county.

President-elect Tennessee Association of Realtors David Sudberry talked about experiences trying to sell homes to buyers without internet service, or the availability of internet services. Houses comparable in size and materials used sell more quickly when buyers can get access to high-speed internet services.

Nassar Nassar, owner and CEO of Savant Learning Systems, a virtual academy offerings services worldwide, had to shut down three offices in the county – one in Gleason, Greenfield and Dresden, due to lack of reliable internet, when the COVID pandemic hit the area. He posed the question, “Is internet an investment or an expense” and referenced the late-Gov. Ned ray McWherter, who pushed for highways. Nassar reminded people of the need for highways and the need for internet highways.

Dr. Keith Carver, University of Tennessee at Martin Chancellor, was also a guest speaker who said they tell students they will get a big college experience at a great rate in a great community when they choose UT Martin. Carver said the county is full of great rental property, but students and faculty struggle when they want to locate in a portion of Weakley County that doesn’t have access to high-speed internet. He talked of many students who had to switch to doing homework on their phones when classrooms went virtual. Seeing the need for internet access, the University provided 200 WiFi hot spots for faculty and students to use in parts of West Tennessee who did not have access to internet. He stressed how students want to remain in Weakley County upon graduation.

Members of the community addressed the board, expressing concerns over having to conduct telehealth visits for family members, without reliable internet access. They also mentioned the lack of cell phone service, combined with lack of internet, poses potentially dangerous situations for family members in the event of an emergency or for those with health issues.

Local farmer, David Parham, said internet is a necessity for his chicken barns and soybean operation after he recently invested $1.8 million for a chicken barn operation in the county. He said the barns rely on internet to connect with one another.

Weakley County Mayor Jake Bynum, who had brought the subject of high-speed internet access before the county commission five years ago, reported from Fiscal Year 2018-19 to Fiscal Year 2019-20, there has been a property tax revenue increase of $82,000 as a result of Tyson’s expansion and farmers in Weakley County willing to invest in the operations.

“We’ve seen an increase in an industry that is beneficial to this county. If it were any other industry, we’d be bending over backwards for them. Agriculture is the backbone of our community,” Bynum expressed. He said he receives hundreds of calls from citizens in the county requesting internet services. The county mayor also noted the county’s current property taxes can carry a payment for this type of note for 10-15 years.

Russ Finney, Dresden resident, works in the agriculture industry and stressed how connectivity in agriculture is more important now than ever. He stressed how children are being left behind in education without having access to internet.

Business owner Alex Bynum spoke in favor of the proposal, telling commissioners citizens aren’t asking for internet; they are demanding it and they should have had it five years ago.

“The people sitting on these walls (county commissioners) are the ones making this decision. If you said the county can’t win a state championship without high-speed internet, it would have passed already,” Bynum said, adding he didn’t want to hear anyone say they want Weakley County to grow if they don’t pass the internet proposal.

Committee member and District 4 Commissioner Gary Eddings said he had one person in his district contact him to say they were against the proposal. He added five years ago, a project to get fiber built out to county residents would have cost $60 million. Now, it’s reduced to $10.5 million, with a plan in place to pay for it and it’s an outcry from the citizens,” Eddings noted.

Committee member and District 8 Commission Roger Donaldson said using dark fiber from Weakley County Municipal Electric System is not feasible as there are TVA regulations, financing it is difficult and the electric system cannot use its land as collateral for such a project.

He reminded commissioners people in the county have been working on a plan for the last five years, despite some commissioners claiming they were blindsided with the proposal last month. The county Fiber Research Committee was formed a little more than two years ago to come up with proposals to bring high-speed internet to all parts of the county.

District 7 Commissioner David Hawks, who voted against the resolution last month, said he contacted Obion, Henry and Carroll counties how they are bringing internet to parts of their counties. Using grants, the counties were able to fund fiber build-outs, although it doesn’t provide for everyone in each of the counties.

Hawks stressed commissioners see the need for the project, but just because the county can afford to spend the money, it doesn’t mean it should.

District 3 Commissioner James Roy Pope, who also voted against the proposal last month, reiterated Hawks’ statements adding the project wouldn’t benefit everyone in the county, only 5,500 households. He said he estimated providing a high-speed build out for rural residents of the county would cost an estimated $2,700 per household, but it wouldn’t benefit the residents of five municipalities in the county. Pope said they are “protecting your money.”

Bynum responded by asking Pope how the Greenfield School gymnasium cost the City of Greenfield. Pope replied the county paid for the school’s gym.

Hawks asked why the proposal wasn’t put out for bids. Bell said other companies told committee members the county was too rural to consider bringing their services to Weakley County.

City of Dresden Mayor Jeff Washburn talked about how the city is providing citizens within the city limits of Dresden through WK&T access to high-speed internet. He said to pay for the project, there was a slight increase in the water bills, but the city maintains the lowest service charges for utilities within the county. A portion of the project is also funded through grants. Washburn mentioned 5G services, but said without fiber, the service is obsolete as transmitters must connect using fiber internet.

“We won’t have 5G service 20 years from now without fiber internet in the county,” Washburn added.

Although it may take five years for project completion, Mayor Bynum said there is talk of putting the burden of the project on “our children and grandchildren, but it won’t matter because they won’t live here anymore.”

Committee members passed the resolution to allow WK&T to pursue all state and federal funding sources for the purpose of providing broadband internet access to unserved areas of Weakley County that are located outside of the city limits of all municipalities.