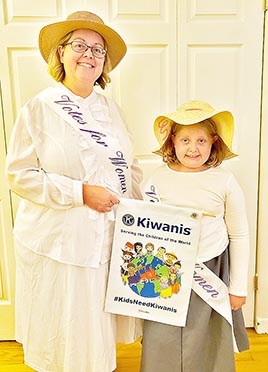 Dr. Renee LaFleur and daughter Eleanor, 8, were guests at the October 28 Kiwanis meeting. Their costumes echo the suffragist movement that led to the ratification of the 19th amendment granting women the constitutional right to vote. The garden flag Dr. LaFleur is holding shows a graphic of children from around the world and features the Kiwanis slogan “Serving the children of the world.”

MARTIN (October 28) – Dr. Renee LaFleur, associate professor of history and director of the Center for Women and Gender Equality at UT Martin, gave a presentation titled, “Marking the 100th Anniversary of the Ratification of the 19th Amendment” at the October 28 Zoom meeting of the Kiwanis Club of Martin.

Dr. LaFleur was assisted by her daughter Eleanor, 8, who described in a video recording the significance of colors associated with the women’s suffrage movement — white for purity, yellow for the sunflower and hope, red for those against suffrage for women, and purple for dignity. Eleanor explained how in Tennessee those in favor of suffrage for women often wore yellow roses and those who were against wore red roses. Eleanor’s father, Dr. Ricky Garlitz, is also a professor of history at UT Martin.

Through a series of pictures and graphics, Dr. LaFleur shared information about women’s activism and the suffrage movement. She explained that the right to vote for women — initially excluding most women of color — was achieved through a lengthy and difficult struggle that involved decades of protest and agitation. Continued activism led to full suffrage for all women decades after the 19th amendment was ratified.

Dr. LaFleur described how Tennessee played a pivotal role in the passage of the 19th Amendment in 1920. She showed a map highlighting 35 of the 36 states necessary to ratify the amendment as she underscored the importance of Tennessee’s vote in the ratification process. She noted that the deciding vote in Tennessee was cast by Harry T. Burns, whose mother had written a letter to him with the words “remember the women.” He voted yes, and Dr. LaFleur said this vote changed the course of action for many years to come.

“This shows how one vote can make a difference,” she said.

Dr. LaFleur and Eleanor are each being presented with a certificate indicating that a donation in their honor has been made to the Martin Public Library Foundation.

Kiwanis president Annie Jones conducted this Zoom meeting with 13 members and three guests present. Since May and after a month in April without gathering as a club, Kiwanis began Zoom meetings and will continue meeting in this format until meetings can be safely scheduled once again in the University Center at UT Martin. Kiwanians Steve Lemond and Clinton Smith have shared the responsibility of hosting the meetings.