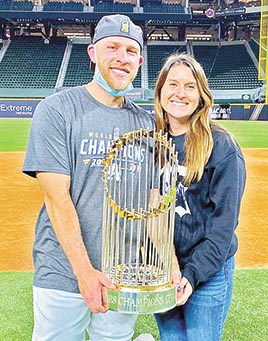 Simmons, who was scouting for the Pittsburgh Pirates at the time, was visiting family in West Tennessee and attending a basketball game when Killebrew asked a question. He wanted to know how Simmons could discern from the masses of players in high school, college and travel ball who had a shot to get to the elite level.

“When you look at the hand, you have four fingers and a thumb. The thumb stands out. We look for that thumb,” Simmons shared.

Dresden has had its share of standout players. Popeye Jones, who played for the Lions 32 years ago, certainly comes to mind. He was the 1988 Mr. Basketball winner and had a stellar career with Murray State before parlaying that success into a National Basketball Association (NBA) adventure that is on-going. Jones is an assistant for the Indiana Pacers.

Weakley County has had a good compliment of top-flight products. Westview can boast Mr. Football winner Chad Clifton, who later became a captain and national champion at Tennessee before earning a Super Bowl ring with the Green Bay Packers of the National Football League (NFL). His teammate Justin Harrell followed him to Tennessee and Green Bay.

West Tennessee can lay claim to other players who have reached the highest level. McKenzie’s Drew Hayes played with the Cincinnati Reds. Ripley’s Raymond King played at Lambuth before his Major League career, which included St. Louis, Atlanta, Milwaukee and the Chicago Cubs. Ramon Foster, also of Ripley, was a star lineman at Tennessee and won a Super Bowl ring with the Pittsburgh Steelers. Don’t forget Jackson’s Al Wilson, who led Tennessee to a national title before earning Pro Bowl honors with the Denver Broncos. Then there’s Hollow Rock-Bruceton Central’s Patrick Willis, who was an All-American at Ole Miss and played in a Super Bowl for the San Francisco 49ers.

Dresden’s Matt Beaty is the latest “thumb” to stand out for West Tennessee. He and his Los Angeles Dodgers teammates won the World Series, topping Tampa Bay 4-2.

When Beaty came to Dresden, people just knew he was different. Killebrew said Beaty and his dad used to take batting practice at the Little League field adjacent to the high school field at Wilson Park.

“You just noticed his bat. That’s the first thing you noticed about him,” said Killebrew. “He shadowed me in eighth grade so I told him to bring his glove and we’d let him shag some balls. We let him play in an intrasquad game and he hit one over the rightfield fence … and he was an eighth grader!”

The former coach said a year later, his freshman product took a blast over the centerfield wall at Union City’s park.

“He’s make some diving catches and after games, he’s take batting practice,” said Killebrew. “He was just a great kid and he made good grades.”

While at Dresden, Beaty started his career as a third baseman, then he was a catcher. After that, he played shortstop. He never was a starting pitcher, but on occasion, Beaty came in to close games.

“He could play anywhere we needed him and he had the talent to do it,” said the coach. “He had a great baseball mind, too. He always wanted to talk baseball and he knew the game.”

Beaty played for Dresden from 2007-2011. Killebrew knew he had talent, but wasn’t sure if he could take the big leap to the Major Leagues.

“Really, you don’t think about that because it’s so hard to do,” the coach said. “We were wondering what level of college he could play at. I didn’t know at that point if he could play in the Majors.”

Beaty was a menace at the plate for Dresden opponents, even being intentially walked while the bases were loaded. Beaty hit 19 home runs his junior year and was invited to participate in a power showcase at Chase Field, home of the Arizona Diamondbacks. Killebrew said that was like a Major League experience for Beaty, given the nature of the workouts.

“The next thing you know, the (Seattle) Mariners were coming to our practices and (St. Louis) Cardinal scouts were showing up at our games,” said the former coach.

The Dresden product was drafted by Kansas City in 2011, but opted to play college baseball at Belmont University. After his career at Belmont, he was picked in the 11th round of the MLB draft by the Dodgers. He played in the minors for the Ogden (Utah) Raptors, the Great Lakes Loons, and batted a combined .314 with four blasts.

In 2016, he was assigned to Rancho Cucamonga and the Tulsa Drillers in 2017. He batted .326 with 15 homers while in Tulsa. He joined the Oklahoma City Dodgers of the Triple A Pacific Coast League. He was part of the Dodgers 40-man roster in 2018 and made his debut with the parent club at San Francisco on April 30, 2019.

Killbrew remembers learning of the promotion.

“He let me know by text and of course we were very excited,” said the former coach. “We’d been following his career through the minors.”

Killebrew perhaps joined many others in Dresden and Weakley County who were stoked to see him in the post-season for the Dodgers, especially when they rebounded from a 3-1 deficit against the Braves in the National League Championship Series.

Beaty played in the NLCS, but didn’t play in the World Series. Killebrew said he watched TV dilligently.

“We were just hoping he’d get an at-bat, but they’d pan the dugout and you could see the excitement on his face,” said Killebrew. “He was doing his part. We were excited for him whether he was a starter or a reserve.”

For the millions who have ever laced up the spikes, swung the bat and broken in a glove, playing in a World Series is the ultimate dream. For Beaty, he’s lived the dream and will be wearing a ring.