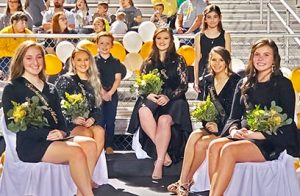 DRESDEN (October 22) – Dresden High School’s Thursday night football game against Gleason celebrated the school’s senior players and marked their homecoming game. The game had been moved from Friday due to the chance of bad weather.

Dresden was able to celebrate this milestone game by winning 20-7 over the Gleason Bulldogs.

Dresden was able to make two more touchdowns after halftime; one by Tatum Oliver, who ran for a three-yard touchdown and Chandler Turnbow, who also ran for three yards to score.

The Bulldogs were able to break the Lions’ defense with a 63-yard run in the last quarter, which was Gleason’s only score of the night. This brought the game to 20-7, with Dresden winning.

Dresden’s Tatum Oliver finished Thursday’s game with 199 passing yards. Chandler Turnbow led in rushing yards with 128 and one touchdown. With the most receiving yards was Raymond Johnson with 103 yards.

For the Lions’ defense, Trevor Moore finished with five tackles, four assists, one sack, and two tackles for a loss of yards. Tatum Oliver had four tackles, seven assisted and Raymond Johnson caught two interceptions and had one assisted tackle.

Dresden is playing its last scheduled game of the season at home when they host the Humboldt Vikings Friday night, while Gleason is traveling to South Fulton. 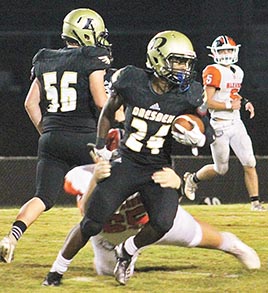 Dresden Lion wide receiver freshman Micah Wingate breaks away from Gleason defenders during Thursday’s match up against the Bulldogs in Dresden. Photo by Jennifer Schlicht