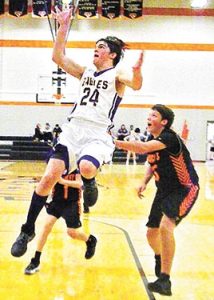 GREENFIELD (October 25) – The Greenfield Junior High School Yellowjackets hosted the Sharon Eagles for the team’s first in-county face off of the season Monday night, October 25. Greenfield was victorious in both match-ups as the Eagles were unable to make the points needed for the lead.

In the girls’ game, Greenfield started with an early lead at 13 points in the first quarter to Sharon’s two points. The Lady Eagles were not able to score a two-pointer until the third quarter when Haley Walters and Lilly Boyd put points on the board. The Lady Eagles did make seven points in the fourth quarter, but it was too late to catch up to the Lady Jackets. Greenfield took the win 28-14.

In the boys’ game, Greenfield continued to fight hard in preventing Sharon from scoring. The Jackets had Baker Biggs score eight points, the most for an individual player in Monday night’s game. Trey Galey for Sharon scored the most points for his team with three, all in the third quarter.

Greenfield kept its lead throughout the game and finished with a 29-8 win over Sharon.

Sharon will play Thursday at Gleason and travels to Bradford on November 3. Greenfield hosts South Fulton Thursday, October 29, and the team will stay in the county when they face off against Martin Monday, November 2.