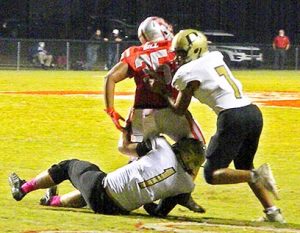 Dresden’s Tatum Oliver and DeAngelo Lambert attempt to prevent McKenzie from making a first down. Photo by Jasmine Williams/The Enterprise

MCKENZIE (October 9) – Dresden High School hoped to continue its two-game win streak when the team traveled to McKenzie Friday night, but the Rebels stopped the Lions at almost every turn. Dresden lost its game to McKenzie by a score of 52-19.

The Rebels set the tone early in the first quarter scoring a touchdown and taking the early lead. Dresden was able to get on the board midways in the second quarter when Raymond Johnson caught the ball from Tatum Oliver for a 16-yard touchdown. The Lions were unable to score again during the first half.

In the second half McKenzie continued to break through the Lions’ defense. The Lions’ offense had a tough battle trying to break through the Rebel defense. In the third quarter, Lion Matthew Parker caught Tatum Oliver’s throw for a 53-yard touchdown. While in the fourth, quarterback Cameron Schlicht threw to Raymond Johnson for an 8-yard touchdown.

McKenzie proved to be too much for the Lions, who fell 52-19.

Despite the outcome of the game, Oliver earned 232 passing yards. Raymond Johnson also did well, receiving for 131 yards and scoring two touchdowns. Matthew Parker had 53 receiving yards.
Dresden made 30 tackles in the game with DeAngelo Lambert and Landon Taylor having five each.

Dresden is working hard this week, as the team is in its bye week. The Lions hope to come back strong when they face off against Gleason October 23.