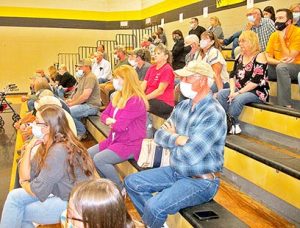 A crowd composed mostly of citizens residing in rural areas of Weakley County voiced strong support for approval of a resolution introduced during Thursday night’s special called meeting of the Weakley County Commission authorizing West Kentucky and Tennessee Telecommunications Cooperative, Inc. (WK&T) to pursue all state and federal funding sources for the purpose of providing broadband access to the unserved areas outside the city limits of all municipalities located in Weakley County.

WEAKLEY COUNTY (October 14) — In reference to Thursday night’s Weakley County Commission meeting, when a resolution authorizing the complete build of a fiber internet infrastructure network throughout the unincorporated areas of Weakley County at a cost of $10.5 million failed approval, those commissioners in favor of the resolution, as well as a large group of supporters in the audience, expressed disappointment over the vote.

Among those addressing the commission during the meeting was Renita Cantrell, who lives in Palmersville with her husband, Ted. Mrs. Cantrell stated Ted has major, long-term health issues, and because of the pandemic, he has been unable to go to the doctor as readily as he needs to. Telemedicine has become a huge avenue for people who are unable to travel or go into doctors’ offices because of the pandemic. However, Ted can’t receive medical help, because he has no internet service and is unable to utilize telemedicine.

A major issue discussed Thursday involves citizens in large areas of northern Weakley County, who lack two methods of communication. They not only have no internet service, they also have no cell phone service.

This situation is complicated by Frontier Communications’ announcement they are not going to add new customers to their system, even though there are many potential customers around the county wishing to be hooked up.

Emily Dunn, who operates a small business in downtown Dresden, is moving to Palmersville, and Frontier informed her she not only will not have internet, she won’t even have access to a landline for phone service at that location. With no landline phone, cell phone or internet service, she has no way to communicate with anyone, which could prove dangerous in the event of an emergency.

Mayor Bynum said, “What happens if someone breaks into her residence, or her home catches on fire. How is she going to protect her family, if she has no way to communicate with the outside world. That is really concerning.”

“We’ve been contacted by countless citizens all throughout the county for various reasons,” Mayor Bynum said. “We have students at the K-12 and collegiate level trying to learn remotely.

“School looks different today than it did 15 years ago,” Bynum said. “There is a huge need for online resources. Students need internet at home to continue their educational advancement.” He stated local college students have difficulty doing their class work, because they don’t have access to the internet.

The need for internet access in the home is underscored by the outbreak of the COVID-19 pandemic, which has necessitated schools to shutdown, and requires students to have access to the internet in order to receive virtual learning at home and do their homework. Currently, approximately 10 percent of the student population of Weakley County is opting for virtual at-home learning, due to health concerns. In the event of another countywide shutdown, many rural students will have to drive into a town to take their classes while parked at a hotspot, such as a library, McDonald’s or other sites.

“That’s not a good option for our students,” Mayor Bynum said.

“We have citizens trying to do business from outside of the municipalities, like J.P. Trucking that can’t get Frontier to make a service call to them,” Mayor Bynum said. “We have citizens like Kenny Louden, who works at Bethel University and can’t work remotely. Lana Coates, whose husband is a day trader who can’t make trades from their home, because they have no internet service. Jordan Yealey has contacted us because he has concerns about his children learning remotely. Shelia Bell, a local real estate agent says she has lost multiple deals because people won’t buy property without internet access.

“We were contacted by Nichole Davis, who operates a poultry facility. Over the past several years, we’ve had major investments from the poultry and swine industries. Because of this, we’ve seen an increase in property values in rural parts of the county because of those operations. Those companies have made investments in our community and are increasing our tax base. Now, we’re not willing to make an investment in order for them to actually do that work. That’s very frustrating for us, and obviously, for those industries,” Mayor Bynum said.

“We’re not sure how many businesses chose not to locate here because we didn’t have access to broadband. Often times, I’ve said, it’s not what puts you on the list that’s important. It’s what keeps you off a prospect’s list. Many times, we don’t know what industries never even looked at us, or all, or the reasons why. But, we do know not having access to broadband is one of those reasons. That is a demand of industry today”.

Since certain grant funding is not available for areas that have up to 25 mbps, and local municipalities already have internet service that meets this threshold, they are not eligible for these funds. This means individual cities are responsible for providing high-speed internet service for their citizens, if they choose to do so.

The cities of Dresden and Martin have already installed fiber-internet service through WK&T at their own expense.

Dresden Mayor Jeff Washburn said, “I understand why many on the county commission are concerned about incurring that much debt, considering they have already spent $3 million for a new county garage (at the Weakley County Highway Department), and $1.3 million on courthouse renovations.”

“However,” he added, “The internet is as important as our interstates. The jobs of tomorrow require internet access today. The lack of broadband hurts our rural communities in economic growth, health care and education. We must close the rural ‘digital divide.’”

Although WK&T installed a major internet cable trunk line along Highway 45, the City of Greenfield cannot tap into it to have local high-speed internet service unless it receives a grant.

The City of Gleason has Charter Spectrum and local citizens have the option of paying to have fiber internet installed to local homes and businesses. Gleason City Hall already has high-speed internet installed.

The City of Sharon already has internet service, but not the higher speeds offered by WK&T.

County Commissioner Gary Eddings, who represents District 4 and is a member of the county’s fiber research committee, composed of Eddings, Donaldson, Doster, Bell and County Mayor Bynum, said, “I thought it was a good plan, and we had a way to pay for it. I was sad to see so many people vote against it. There were a lot of ill people over how the vote turned out. I hope commissioners reconsider it in the near future when this topic gets bought up again. We’re going to continue trying to get fiber throughout the county for everyone.”

Mayor Bynum stated he was disappointed with the outcome of the vote, which rejected the resolution.

“I think we’re most disappointed for the citizens of Weakley County in the rural areas,” the mayor added.