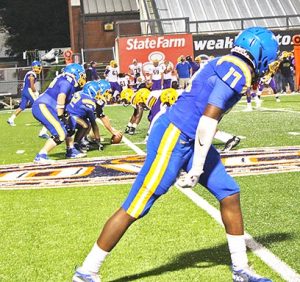 Westview wide receiver Quincy Hamilton lines up in preparation to catch a pass from quarterback Ty Simpson during the Chargers’ first home game of the season when the team took on Covington Friday night.

Westview Shut Out by Covington in Team’s First Home Game

MARTIN (September 18) – The No. 6-ranked Westview Chargers suffered a huge loss after the team’s first home game of the football when it hosted the No. 2-ranked Covington High School Chargers.

The first quarter saw Westview handing over the ball to Covington with the team putting the first points on the board with 2:40 left in the quarter.

After a few incomplete passes and a false start, Westview couldn’t gain any momentum as the score going into the second quarter was at 7-0, Covington leading.

Covington scored its second touchdown early in the next quarter and picked up a two-point conversion. The No. 2-ranked team picked up another touchdown with almost six minutes remaining in the second quarter bringing the score to 22-0.

Coming back from halftime seemed to be more of the same as the Chargers suffered more losses of yards, incomplete passes and another false start penalty. Covington scored quickly into the third quarter with 7:56 remaining, holding its lead at 29-0.

Charger quarterback Ty Simpson carried the ball the next two plays, but didn’t complete the pass on Westview’s attempt to get a first down at 3rd and 1. Hoping to pick up that yard, Westview had another unsuccessful attempt at getting a first down and turned it over to Covington. Within two plays, the Covington Chargers put another seven points on the board making it 36-0 in the third quarter.

Fourth-quarter action saw Covington scoring once again with 7:30 remaining, making it 42-0. Westview remained scoreless throughout the fourth quarter. With two seconds remaining in the game, Covington successfully connected a pass in the end zone leaving the final score at 48-0.

After the game, Westview Head Coach Jarod Neal said the loss was a tough one and no offensive players stood out for their performance that night. Neal noted the team would learn from its mistakes and keep moving forward.

Defensively, Lane Pierpoint ended up with 13 tackles, while Hayden Smith followed close behind with 11 tackles and Quincy Hamilton had 7 tackles, with one forced fumble.

Marquez Taylor led the defensive line with 18 tackles, 8 of those unassisted.

Simpson had 8 carries for a total of 17 yards, while Marquis Taylor had 4 pass completions for 22 yards.

Jackson Abel had five punts, with a 51-yard average. His longest punt of the game was 62 yards.