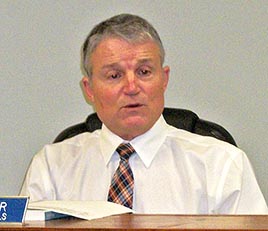 DRESDEN (September 3) — One of the major topics of discussion during the Thursday, September 3, 2020, meeting of the Weakley County School Board was the recent news that the United States Department of Agriculture (USDA) is covering the cost of school lunches for all students.

According to Director of Weakley County Schools Randy Frazier, the free lunches were added to the free breakfasts already served at Weakley County Schools, regardless of income. On Thursday, the USDA announced it was extending the flexible, free-meals program that helped the Weakley County Nutrition Department to serve more than 420,000 meals since the early closure of schools in March due to the global COVID-19 pandemic.

Frazier stated the extension of the program also allows for families with students from more than one school and currently enrolled in the Monitored Distance Education program to pick up their food from one location.

The free meals are set to continue until Christmas break.

The Seamless Summer Options (SSO) program provided free meals for all children, ages zero to 18, during the summer months.

“We need to determine whether we’re going to be an open site or a closed site,” Frazier said. “When we were closed from March through the summer, we were considered an open site, which meant any child in Weakley County, up to age 18, could come to our campuses and get a meal. A closed site only allows Weakley County students to pick up free meals.”

With many students returning to school, it is hard to determine how many meals to prepare for pickup. “We might have too many meals one day and run out the next,” Frazier said.

He notes, over the past several years, Weakley County has developed a strong Backpack Program, which provides meals for approximately 350 students to carry home for their evening and weekend meals. That’s an issue right now. He states, the need is still there, but too few people have volunteered.

“We can fix meals for children to carry home over the weekend, and we intend to do that. We would start with the children in the Backpack Program.” He noted, in order to prepare enough meals, the number of children participating must be determined and the logistics must be worked out. “Parents may have to pick them up, since all of those meals can’t be hauled on buses. But, I don’t want to overwhelm our cafeteria workers.”

Weakley County School Board Chairman Steve Vantrease stated he has been in contact with those hosting the Backpack Program and they will coordinate their efforts with the School System.

In other business, the election of School Board officers for the 2020-2021 school year resulted in the following appointments: Steve Vantrease was re-elected to serve as chairman; Joshua Moore was re-appointed as vice chairman; and Kim Longacre was selected to serve another term as a Teacher Leader Network Representative for the Tennessee School Board Legislative Network.

Frazier recommended discontinuing temperature checks for students. After Labor Day, schools will continue operating under the existing safety protocol, but will not check students’ temperatures. He explained not a single child had to be sent home this school year because of a fever.

“The parents are doing a good job at home. If the children are not feeling well, they’re not sending them. CDC (Center for Diseases Control) is recommending it is not as vital to screen for temperatures, as previously thought. Teachers still have the option of checking students in class with touchless thermometers. Students will continue entering schools at multiple entries to prevent large groups from congregating, and continue using hand sanitizer,” the director noted.

Regarding the School System’s sick-leave policy, Frazier said, “I had a discussion with our board attorney and he recommends the School Board delay drafting a specific policy.” He noted the Family First Act is still in force until December 31. “If we do anything differently at this time, we could be in conflict with federal law. The attorney recommends allowing the director of schools to handle sick-leave issues on a case-by-case basis, in the event teachers have special situations requiring them to go beyond what the sick-leave policy currently allows,” he added.

The board unanimously approved an amendment to the General Purpose School Fund involving the Special Education Program. “We received an additional $75,000, which is called a transition school-to-work budget,” Frazier said. “We’re going to hire a person through this grant, in order to transition our special-needs children from high school into their next setting, whether it be a career or possibly a CDC work setting. We’re going to hire an additional contracted speech therapist, in addition to other services, to meet the needs of our students, who may have gotten behind because our schools were closed.” He added the budget also pays the costs for parents to transport their children to and from the school for the deaf.

Amendments to the School Federal Projects Fund included carrying over more money than usual from last year’s budget, because of the early closure of schools.

“The budget will continue to be fluid throughout the year, as part of the special situation we’re dealing with,” Frazier said.

Additional funds provided through the CARES Act help mitigate the costs to schools associated with the COVID-19 pandemic.

Frazier stated, due to the threat of spreading the COVID-19 virus, parent and teacher conferences may be spread out over several days, rather than having it on one or two days, in order to prevent large crowds from gathering in hallways.

Frazier said, “Overall, the report for the first three weeks of school is good. I can’t brag enough on the work our folks did preparing for our schools to open. I think our safety teams, administrators and teachers have worked really hard.”

Frazier stated sports are now in better shape, with all but one of Weakley County’s football teams holding practice sessions, and the other team will return to practice in a couple of weeks.

Frazier announced students will have no homework for the first six weeks of the current school year, due to the many complex problems being worked out.