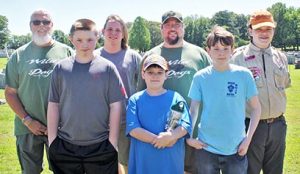 Speakers will discuss the tragic loss of life caused by the terrorist attacks of September 11, 2001. The commemorative memorial event will recognize the heroism and sacrifices of first responders, who rushed into harm’s way in an effort to save as many lives as possible before the twin towers collapsed. Additionally, it honors the country’s flag and what it stands for.

During the local patriotic event, the Boy Scouts will demonstrate flag etiquette, which includes the proper way to fold a flag and what each of the 13 folds represent. They will also present a flag-retirement ceremony to properly retire and any torn, tattered or worn flags.

Community members are invited to bring chairs for the outdoor event.

Hamburger and hot dog dinners will be sold to raise funds for the Legion and Boy Scouts. First responders on duty that evening are invited to stop by the Post and pick up a complimentary dinner from the Scouts and Legion membership in appreciation of their service. First responders may call 587-4886 to have their food orders ready for pickup.

Local businesses and vendors are invited to set up booths.

Lt. Col. Christopher Messina, Joint Strategic Communications Director for the Tennessee National Guard, said, “We had a static display request to participate in a Gold Star Memorial Highway dedication on Bear Creek Pike in Columbia, from Tennessee State Representative Scott Cepicky.” The highway dedication will also be held on September 11, 2020.

The attacks, often referred to as 9/11, were a series of four coordinated terrorist attacks by the Islamic terrorist group al-Qaeda against the United States on the morning of Tuesday, September 11, 2001. The attacks resulted in 2,977 fatalities, more than 25,000 injuries, and substantial long-term health consequences, in addition to at least $10 billion in infrastructure and property damage. It is the single deadliest terrorist attack in American history. Among the dead were 343 firefighters and 72 law enforcement officers, which made it the single deadliest incident for firefighters and law enforcement officers in the history of the United States.

Numerous memorials were constructed, including the National September 11 Memorial and Museum in New York City; the Pentagon Memorial in Arlington County, Virginia; and the Flight 93 National Memorial at the Pennsylvania crash site.

In addition to the 9/11 tribute at the American Legion Post, the group sponsored procuring statues representing America’s fallen veterans a few years ago, which are located at the Martin Police Department, including:

Foley and Laird were killed in action in Iraq, and Morel was killed in Afghanistan.

Additionally, members of the American Legion Riders are placing foot markers on the graves of veterans. Laird explained, a couple of years ago a large number of the markers were discovered at local funeral homes, which had never been placed on veterans’ graves. A great many of them have since been installed, but approximately 90 are waiting to be placed. One has been at a local funeral home since 1982.

The funeral homes order the foot markers from the U.S. Government, which provides the foot markers free of charge. It takes a couple of months before the bronze foot markers arrive. It costs approximately $40 for the Riders to install them, which involves pouring a concrete slab in the ground to bolt the markers to. Since the markers were discovered, roughly half of them have been placed and the American Legion Riders are in the process of installing the rest of the markers.

The Riders typically place markers on the graves of veterans at 6 a.m. every other Saturday. The patriotic group started in Martin at East Side Cemetery and plan on going to Memorial Gardens next. They have also placed foot markers at other cemeteries in the region, including McKenzie and Troy, as well as Hickman, Kentucky.