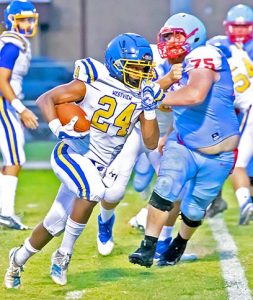 GIBSON COUNTY (August 27) – The Westview Chargers moved their Friday night football game to Thursday last week due to predicted inclement weather as remnants of Hurricane Laura inundated the area. Despite the switch, the Chargers still continued with their winning start to the season by beating Gibson County 44-14.

Westview went into its game against Gibson County Thursday after its win the week prior against Portland.

Westview began the game strong earning 41 points before halftime. The Chargers scored three more points in the third quarter. The Chargers’ defense prevented Gibson County from scoring until the fourth quarter of the game.

The Chargers had multiple players step up during this game on the offensive side with Ty Simpson as one of the top players. Simpson had three carries for 20 rushing yards Thursday and scored four touchdowns for 205 total yards.

One major play in Westview’s game was when Omarion Harris intercepted a return kick for a 21-yard touchdown.

On Westview’s defense, Hayden Smith finished with eight tackles with one causing a loss of yards for Gibson County. Peirpoint and Ashton Carter had seven tackles. Dearca Nicholson had six tackles, with one a forced fumble for Gibson County.

The Chargers travel Friday evening to take on McNairy County. Kickoff is at 7 p.m. 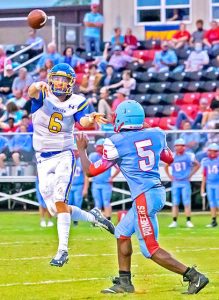 Westview quarterback Ty Simpson looks around a Pioneer during Thursday night’s game in Gibson County. Simpson scored four touchdowns, leading to a blowout by the Chargers. Photo by Christel Laney