HENRY COUNTY (August 25) — A UT Martin student escaped injury over the weekend after his car burst into flames on State Route 22 N. near McKenzie.
At approximately 1 p.m. on Sunday, August 23, McKenzie dispatch received a call about a small black car on fire entering McKenzie city limits from the Gleason side of town. The driver was unaware of the fire, according to the dispatch.
McKenzie Police Department and McKenzie Fire Department responded to the scene just outside McKenzie city limits. The vehicle was parked in the emergency lane and fully engulfed in flames. Firefighters extinguished the flames in about 10 minutes.
Montgomery stated the steering assist on his 2013 Ford Fusion shut down and the brakes wouldn’t work. The driver told authorities he engaged the parking brake and was able to stop the car near Patterson Road, which is located in Henry County near the Weakley County line.
Moments after he exited the car, the vehicle was completely engulfed in flames.
Fire Chief Brian Tucker reports a broken fuel line was the cause of the fire.
The vehicle was owned by Mark Montgomery of Scotts Hill. No one was injured. 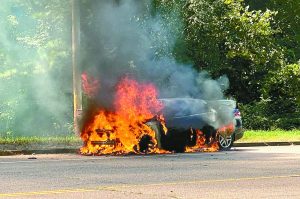 A UT Martin student had a close call over the weekend, when his 2013 Ford Fusion caught fire along State Route 22 N. near McKenzie. Photo by Joel Washburn/The Enterprise