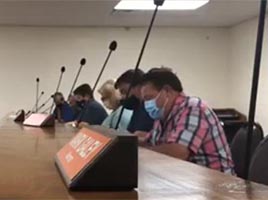 Greenfield Board members discuss why a referendum deciding whether or not the number of aldermen should be reduced from eight to six will not be on the November 3 municipal ballot.

GREENFIELD (August 11) — During the August 11, 2020, virtual meeting of the Greenfield Board of Mayor and Aldermen certain board members expressed their displeasure that a referendum calling for reducing the number of aldermen from eight to six will not appear on the November 3 ballot.

Alderman Mike Caudle said, “It has come to my attention the referendum will not be on the ballot this fall.” He asked City Attorney Beau Pemberton for an explanation.

Pemberton said he was surprised to learn the city is required to pass a private act empowering the board to place it on a referendum. “Contrary to the advice we were given by Municipal Technical Advisory Service (MTAS) at our public meeting, our charter doesn’t expressly allow us to do that,” Pemberton said. The city attorney explained he later learned about the requirement for the city to pass a private act, after forwarding the paperwork to place the referendum on the ballot to State Election Office.

“How long have you known this?” Caudle asked.

“That was a misunderstanding on my part, but we’re going to fix that,” he added.

“How are you going to get it on the ballot this November?” Caudle asked.

“It won’t be on the ballot this fall, Mr. Caudle,” Pemberton said.

“You’ve been working on this since January,” Caudle said. “You’ve had enough dealings with the Election Commission you should have known that by now.”

Alderman Thomas Tansil stated he spoke to Weakley County Administer of Elections Alex Britt earlier in the day and learned he was not aware of the need to pass a private act until June.

“It seems like somebody from Nashville should have gotten in touch with you or Alex or someone sooner,” Tansil said.

Alderman James Roy Pope said, “We were all given the same information by MTAS. It was all out in an open forum. I don’t see how you could hold it against Mr. Pemberton.” Pope said he did not believe it was done with any malice.

When Alderwoman Karen Campbell asked Pemberton how long ago he knew the referendum would not be on the ballot, he replied, “That would have been approximately three-and-a-half weeks ago.”

Campbell argued, “MTAS is a consulting group. You are a lawyer, and are to advise us and seek out what is legal and what is not legal.” She expressed her concern there was no action on Pemberton’s part between January and when he heard from the State Election Commission. “Although we had a consultant, why were there no checks on the legality of it?” she asked.

Pemberton said, “like any attorney does, I rely on professional expertise to help guide the discussion, and I was not aware of any specific provision that would prohibit us from having a referendum until I was corrected.” That was a surprise to me, as it was to Mr. Britt and others.”

Pemberton said he did not submit the proposal until his deadline, leaving no time for the possibility of a denial and further necessary actions.

Alderman Caudle asked why no mention of this had been made before.

Pemberton said, “Because it hadn’t been asked of me, and I didn’t think to bring it up to the board. Apparently, that’s my shortcoming.”

Alderman Tansil said, “In light of everything I’ve heard, I don’t think Beau acted with malice, but, like the rest of the board, received information that was incorrect.”

Caudle made a motion to dismiss the city attorney, which was seconded by Alderman Mark Galey.

The motion to dismiss Pemberton failed by a vote of 5-3, with Aldermen Paul Grooms, Tansil, Pope, Donald Ray High and Bobby Morris voting against Pemberton’s dismissal and Aldermen Mike Caudle, Mark Galey and Campbell voting in favor of his dismissal.

Concerning the option of holding a special election solely for this particular referendum, Mayor Cindy McAdams estimated it would cost the city approximately $10,000. “I’m not going to do that to the city,” she said.

Tuesday night’s virtual meeting can be viewed online via Facebook Live on the City of Greenfield, TN page.