BY DAVID FISHER
david@dresdenenterprise.com
MARTIN (August 5) — A big-hearted Martin man recently rescued a litter of puppies dumped at an unoccupied residence.
Eighteen-year-old Westview graduate, Tion Gunn, is credited with saving the lives of five puppies he found abandoned outside a vacant home Tuesday, July 28.
“I was riding around, and when I drove past an abandoned house, I noticed an unusual box in the driveway, so I pulled up to see what it was. Before I got out of the car, I could see all of the puppies and my heart just dropped. At the same time, I was wondering ‘what am I going to do with five puppies.’ Then, I thought to myself – ‘take care of them and show them I love them,’” Gunn said.
He reached out to Debbie Reynolds, a local veterinarian who provides mobile veterinary services for dogs and cats, to get the puppies the care and treatment needed.
Gunn kept one of the puppies that bonded with him and named him King.
Reynolds, who owns and operates Veterinary Home Healthcare and the Blessed Pet Shop in Martin, states she heard about the puppies when the former member of her church youth group called for an appointment to provide veterinary services for the animals.
“I’m so thankful Tion took notice of the cardboard box full of puppies sitting in the hot sun,” Reynolds said.
Reynolds, a 19-year veterinarian, said, “I think it’s remarkable he did all of that. I often get calls from people who find abandoned pets and ask ‘what can I do with this box?’ Most people immediately start looking for an animal shelter and leave it for someone else to take care of the problem. Gunn became the solution to the problem.
“Walking away wasn’t an option for him,” Reynolds said. “Instead, he took it upon himself to take care of them. He got them out of the heat and fed them. He told me, ‘I found them and I’m taking care of it.’ By the time I showed up at his house, he had already found a home for all of the puppies and was taking care of the one he kept. He was really responsible,” she added.
“I knew a couple of friends that wanted puppies, so I found them good homes that same day,” Gunn said. He states the new owners of the four-to-five-week-old puppies called to let him know they took their new pets to the veterinarian.
Regarding the thousands of pets dumped by people each year she said, “Thankfully, there are heroes like Tion that come to their rescue.”
“I’m really proud of Tion. He has overcome a lot of adversity, and is a really sweet young man,” Reynolds added.
Gunn said he plans to attend Dyersburg Community College, but has not decided on a major. Considering his love for animals, it might involve a career caring for animals. 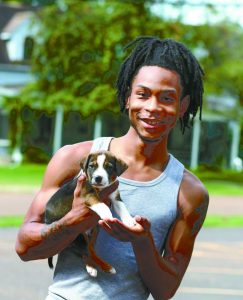 Tion Gunn holds a puppy he named King after rescuing the abandoned animal and the canine’s four siblings he found abandoned outside a vacant Martin home.