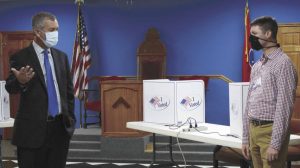 BY SABRINA BATES
sabrina@dresdenenterprise.com
WEAKLEY COUNTY (August 1) — The 14-day early voting period for Thursday’s election ended Saturday, August 1 and voters in Weakley County already surpassed the early-voting turnout in 2016 by 181 percent.
As of this weekend, 3,181 votes were cast for the Thursday, August 6, 2020 state/federal primary and county general election. In 2016, 1,132 early votes were cast in the August election.
In comparison to the 2012 election, only 890 early voters turned out for the August election. This year’s results reflect a more than 257-percent increase in voter turnout.
Voters had two locations to cast an early ballot during the 14-day period. The election commission office in Dresden served as a polling place for early voters and the Martin City Masonic Lodge offered a second satellite location to cast an early vote.
The Lodge was one of eight stops in West Tennessee made by Secretary of State Tre Hargett as he talked with poll officials about turnout and safety precautions in the midst of the COVID-19 pandemic.
Hargett said early-voting totals showed strong numbers across most of the state. He reported although the country is in the midst of a health pandemic, voters are willingly donning masks, keeping their distance and seemed overall satisfied with the voting process.
Weakley County Administrator of Elections Alex Britt echoed Hargett’s reports, saying early voters were agreeable with recommendations for masks and social distancing. Britt said the goal was to keep voters safe and healthy while limiting touchpoints. Machines were sanitized after each use and voters were offered masks and hand sanitizer throughout the process.
With the early-voting period over, voters who haven’t cast a ballot have one more opportunity Thursday in the August election. Even though Weakley Countians broke past records, only 17.37 percent of registered voters cast a ballot. More than 84 percent of the ballots cast were Republican, with 2,685 votes.
A little more than 15 percent were Democratic ballots, with 481 votes. Seventeen voters opted not to vote in the primary election.
For the State Republican Primary, there is one seat open for the U.S. Senate, one seat for U.S. House of Representative, one seat for the Tennessee Senate District 24, and one seat for the Tennessee House of Representative District 76. For Weakley County’s general election, County Commission seats for District 5 and 7 and Assessor of Property are on the ballot. There are multiple seats for School Board members including; District 1, 3, 5, 7, and 9. Finally, Constable District 1 and District 5 is on the ballot this year.
The Democratic State Primary, the U.S. Senate seat, and the U.S. House of Representative seats are up for election. The Tennessee Senate District 24 and 76 are on the ballot but have no qualifying candidate listed.
Voters must cast a ballot at their respective polling location between 8 a.m. and 7 p.m. Thursday. A photo ID is required to vote.
For more information about local polling locations, visit www.govotetn.com or download the free app, GoVoteTN.