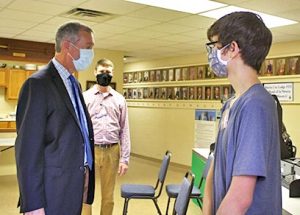 Hargett said early-voting totals show strong numbers across most of the state. He reported although the country is in the midst of a health pandemic, voters are willingly donning masks, keeping their distance and seem overall satisfied with the voting process.

Weakley County Administrator of Elections Alex Britt echoed Hargett’s reports, saying early voters are agreeable with recommendations for masks and social distancing. Britt said the goal is keep voters safe and healthy, while limiting touch points. Machines are sanitized after each use and voters are offered masks and hand sanitizer throughout the process.

With two locations in the county to cast an early ballot for the August 6, 2020, state primary/county general election, numbers show people taking advantage of their options.

As of Thursday, July 30, 2020, voter turn out for Weakley County totals 2,560. Although that number reflects a turnout of 13.97 percent of registered voters in Weakley County, in comparison to the 2016 early-voting turnout, it reflects an increase of 194.9 percent. Only 764 voters cast an early ballot during the August 2016 primary/general election.

Of the 2,560 early votes cast in the last 11 days of the early-voting period, Republican ballots total 2,141; Democrat ballots total 404 and 15 voters opted to only cast a ballot in the county general election.