BY DAVID FISHER
david@dresdenenterprise.com
MARTIN (July 13) — One of several important items on the agenda at Monday night’s Martin City Board meeting was the first reading of an ordinance establishing mail-in ballot voting procedures for non-resident property owners in municipal elections.
The ordinance reads in part:
“All persons residing outside the corporate limits of the City of Martin, who own real property within the corporate limits of the City of Martin and who are entitled to vote in the City of Martin municipal elections pursuant to the Martin Charter, and other general law requirements, shall cast their ballots in the City of Martin municipal elections by absentee mail-in ballots.”
When the question was called on the motion, the ordinance passed by a unanimous vote.
A rezoning ordinance encompassing three properties within the city limits of Martin was approved on first reading. The ordinance rezones a property (Tax Map 73, Parcel 22.00) owned by the family of Kathleen Olds; a property (Tax Map 73, Parcel 21.00) owned by Rick Wilson; and a portion of adjacent right-of-way on Courtright Road, from R-1 (Low Density Residential) to B-2 (Intermediate Business).
There will be public hearings and second readings of the above-mentioned ordinances on August 4 at 5:15 p.m. over the internet utilizing Zoom.
A resolution establishing the City of Martin’s computer, tablet, cell phone, electronic device, e-mail and internet usage policy was approved.
City Recorder Kelly Wilson stated the policy must be approved for the City to get cyber insurance.
The resolution received full board approval.
Consideration of a grant proposal regarding the Martin Housing Authority was postponed until the August 4 board meeting, since Pam Bratcher, Executive Director for Martin Housing Authority, was not in attendance at Monday night’s Zoom meeting to discuss the grant.
The board voted to replace Sharis Diggs Chandler with Courtney Echols on the Title VI Committee, which is responsible for investigating all complaints of harassment, sexual harassment, age discrimination, disability discrimination, and employment discrimination based on gender.
Next on the agenda was a request by the Tennessee Valley Authority to grant the electrical power provider with easement rights for the installation, inspection and maintenance of a transmission line. The property in question involves a strip of land approximately 100 feet in length and 150 feet in width located in the Second Civil District of Weakley County. The City of Martin will be compensated for the full appraisal rate of $2,275.
Alderman Randy Edwards stated, if TVA ever abandons the line, he would like for the property to revert back to the City. “I know of instances where they have abandoned lines and the sellers couldn’t regain possession,” Edwards said.
The board voted to allow Mayor Randy Brundige to proceed with selling the easement to TVA with the stipulation he attempt to get TVA to agree the property reverts back to the City of Martin if it is ever abandoned. Mayor Brundige stated if TVA agrees to the terms proposed by board members, the City will probably have to refund the original sale price of the land.
The next informal City Board meeting is Tuesday, August 4, and the regular City Board meeting Monday, August 10. Both meetings begin at 5:15 p.m. in the City Courtroom. 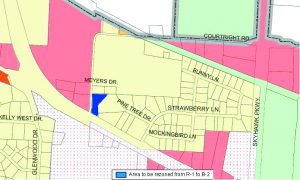 A rezoning ordinance involving three adjoining properties within the city limits of Martin was approved during Monday’s meeting of the Martin Board of Mayor and Aldermen. The blue area above shows the areas to be rezoned.