BY DAVID FISHER
david@dresdenenterprise.com
DRESDEN (July 9) — Runners competing in the Last Annual Vol State Road Race ran through Weakley County on Thursday as they traveled from the banks of the Mississippi River at Hickman, Kentucky, to the top of Sand Mountain at Castle Rock, Georgia. Although its name would seem to indicate this is the last year for the event, the “Last Annual” race actually bears that designation each year.
Those participating in the 314-mile road race are allotted ten days to complete the course.
The runners started their morning coming off the ferry and running 40 miles to Dresden.
Dresden and Gleason provided rest stops for the runners as they ventured through the county. Dresden’s rest stop was located at Dresden Farmer’s Market and Gleason had a rest stop set up inside the Gleason Fire Station. Volunteers in both cities provided snacks and drinks to replenish the hungry and thirsty runners and gave them a chance to cool off before continuing on their journey. Local volunteer Shawn Sumner told the Enterprise this was her third year to help at the rest station.
“With the help of Jeff Washburn and Jennifer Branscum, I set out signs along the course, and had plenty of water, Gatorade, and snacks for the runners. My daughters and I stay at the Farmers Market until the last runner comes through Dresden. We hardly get any sleep, but it’s worth it. I am very proud of these runners and to be a part of the Vol State Race each year. Serving others is what it’s all about,” Sumner noted.
Dresden Farmers Market provided food, refreshments, restrooms and rest during the hot and humid day.
“There were 66 runners in the event this year,” Dresden Mayor Jeff Washburn said. “Most of them came through Dresden and stopped at the rest stop where they received refreshments courtesy of the City of Dresden and local citizens who contributed food items for the runners.
“The rest stop and aid station was staffed by Dresden City employees and local volunteers. City employees set up the rest stop and volunteers stayed there all night long. We also provided mats for them to sleep on overnight at the Farmers Market.
“They were being ambassadors for the City of Dresden,” he added.
According to Mayor Washburn, runners came from all over the United States and other countries to take part in the race.
“It was a good chance to showcase Dresden and show our hospitality to those participating in the race,” Mayor Washburn said. “People have become familiar with the City of Dresden and its hospitality, as a result of our efforts.”
The first runner to reach Dresden would maintain her lead throughout and eventually claim the title of King of the Road. Francesca Muccini traversed the course in a blistering three days, ten hours, 49 minutes and 40 seconds, the third-fastest finish in race history. It’s her second win, following her 2017 victory in which she set the women’s record at just over four days and four hours.
Another oasis from the sweltering heat was Gleason Fire Station, which offered runners a place to enjoy snacks and drinks, use the restroom, shower and rest up. Additionally, mats were provided for the runners sleep on before continuing on their journey.
Gleason firefighters and Gleason Road Angels Kim Montgomery and Angie James volunteered to help operate the rest stop for the runners during the day Thursday and continued until noon Friday. Carter Cook, whose daughter is a member of the Gleason Fire Department, also assisted in operating the rest stop.
The food and drinks were paid for by donations from members of the Gleason Fire Department.
“We had 120 people stop by Gleason Fire Department last year,” Kim Montgomery said.
This year was the first time for longtime distance runner David Jones from Murfreesboro to participate in the Last Annual Vol State Road Race.
The 68-year-old runner was accompanied by his wife of 35 years, Pallie Jones of Murfreesboro, and family friend, Mary Marshall, from Franklin, Tennessee. These ladies, who served as his support team, accompanied Jones on his trek in an SUV. They are also runners, but did not enter this particular race.
Last November, Jones broke an American age group record for 100 miles by an hour and 30 minutes at Tunnel Hill at City Park in Vienna, Illinois. He also completed the 35-mile-long Bad Water Run through Death Valley ten times. He excelled in the 1990’s when he was an overall winner and age group record holder in various running contests. 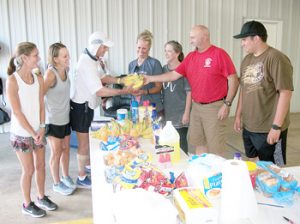 Gleason Fire Station offered runners in the Last Annual Vol State Road Race a place to rest and enjoy snacks and drinks, before continuing on their journey from Hickman, Kentucky, to the top Sand Mountain at Castle Rock, Georgia. Those pictured are (L to R): Mary Marshall and Pallie Jones, who serves as the crew supporting runner David Jones; and Gleason volunteers — Angie James, Kim Montgomery, Zack Montgomery and Carter Cook. 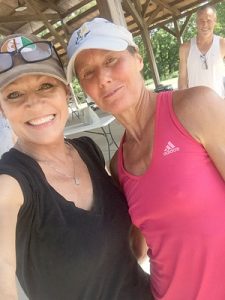 Runners in the Last Annual Vol State Road Race were treated to snacks and drinks at Dresden Farmers Market on Thursday. Local volunteers joined with city employees in staffing the refreshment booth and other facilities. This is the sixth year Dresden has provided a rest stop for the runners. Volunteer Shawn Sumner (left) greeted the first runner to come through the pavilion of the Farmers Market, Franchesca Muccini. Muccini went on to claim the title King of the Road (for the second time) with the third-fastest finish in race history at 3 days, 10 hours, 49 minutes and 40 seconds.