By Jasmine Williams
enterprise@dresdenenterprise.com
DRESDEN (June 10) — Practices have resumed for high school football. Dresden High School’s Head Coach Wes Johnson and his staff are following many new procedures to protect the health and well-being of their student-athletes.
Before athletes can enter the practice facility, they must have their temperature checked and answer questions about their recent health. If a student feels they have been exposed to someone with COVID-19 or are not feeling well, they are asked to return home.
As guidelines put forth by the state suggest that programs not have more than ten people at a time at practices, Dresden is only allowing eight students at a time to practice. This allows two coaches to help students as needed. Practice sessions last one hour each. Staggering the sessions so every player can train and practice each day has been one of the biggest changes for Dresden. Coach Johnson said that after every session, the coaching staff cleans and sanitizes all equipment used before the next players arrive.
The coaching staff is also helping to prevent any cross-contamination by having students not use equipment already used by another. This means that students are only lifting weights that they have touched, which prevents any germs from spreading. On the topic of all the new protocols, Johnson expressed how important it was to him and the whole coaching staff that each player stays healthy. “We are going to take as much precaution as we can. The health of our student-athletes is the foremost concern for us.”
Coach Johnson also stated how happy he was with how every student and parent has been during this time, that everyone had been taking the new protocols seriously and following the rules well.
On the practice season as a whole and the upcoming football season, Johnson talked about the setbacks and his hopes for the coming month.
There has been no drop in the number of players on the team this year due to the large freshman class that will be starting their high school career this year, but Johnson said that the athletes are not in their best athletic shape compared to previous years due to not being able to practice for three months. He stated he expected the team to be in the same physical condition by the time the football season starts in the fall. He is also expecting a normal football season and is still hoping for a season that can take Dresden back to the state championship game.
When asked if there could be a limitation on crowds this season because of COVID-19, he expressed concern for small-town athletics as a whole, saying that many might not be able to afford hosting games if not all fans can attend. He also said that if schools close early it will more then likely mean an early end to the football season.
Overall, Johnson was very excited for the players to get back to their life before COVID-19 and get ready for the upcoming football season. He hopes that they can not only have an exciting football season but an exciting school year. 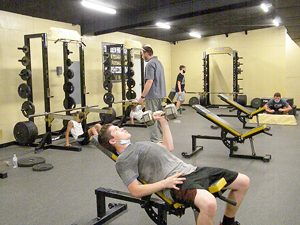 The Dresden High School football team has returned to practice after a three-month break.