On Memorial Day, outgoing Veterans Affairs Officer Rick McKenzie, who retired on May 15, and incoming Veterans Affairs Officer Ricky Cobb, joined with fellow veterans across Weakley County in honoring those who paid the ultimate sacrifice for the freedoms we enjoy as American citizens.
Flowers were placed at the war memorial by Chace Kesterson and were picked from various homes around the community.
Because of the COVID-19 pandemic, the usual services at the Weakley County War Memorial Monument on the courthouse lawn were cancelled. Instead, a video tribute to the county’ war dead was posted on the Veterans Affairs Office website, including a list of those who died in foreign wars.
The tribute reads:
“We pay tribute to those who fell in battle defending our country. This observance had its beginnings following the Civil War when Southerners marked the graves of those who died fighting for the Confederacy. Today, we honor all of America’s war dead – those who died so that freedom might live.
Their sacrifice spans the history of America, from the Revolutionary War to the present. ‘These patriots left their homes and families when their country called and gave the last full measure of devotion in defense of freedom.’
We ask that all Weakley County citizens pause to remember America’s fallen sons and daughters on this Memorial Day.”
The website then gives the Weakley County War Memorial Roll Call.
The tribute may be viewed at the following web address: facebook.com/wctnva 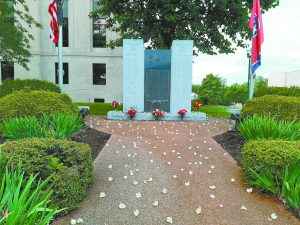 The Weakley County War Memorial lists the names of military service men and women who were killed while serving in foreign wars.