BY DAVID FISHER
david@dresdenenterprise.com
MARTIN (May 19) — Jamie Summers, who serves as Chief of the Martin Fire Department, as well as Deputy Director of the Weakley County Emergency Management Agency, has been honored by being named EMA Employee of the Year for 2020.
Emergency Management Director Ray Wiggington said, “I’d like to congratulate Mr. Jamie Summers. He’s been a great asset to us and the county. He has a dedication to public service and his fellow man, and I can’t let something like that go unrecognized.”
According to Wiggington, when he took over the job of EMA director from the previous director, Dustin Kemp, he kept Summers on the staff. “He has a wealth of experience in public safety” Wiggington noted.
“With the COVID-19, people have forgotten about some of the mundane things that we’ve done, such as our Hazard Mitigation Plan,” Wiggington said. “Earlier this year, we had to get that renewed. He acted as our liaison to the City of Martin. Additionally, he went before all of the city boards, the schools and the Weakley County Commission to get a resolution passed adopting the new Hazard Mitigation Plan.” The EMA director stated the plan must be reapproved every five years, and the last time this occurred was in January of 2020.
Wiggington explained the countywide plan serves to prepare communities to deal with a wide variety of emergencies. “It can be anything you do beforehand to lessen the blow of disasters. Mr. Summers was instrumental in helping us with that. Also the physical resources that he provided, such as printing, helped everybody.”
He stated, in addition to being chief of the Martin Fire Department, Summers also does things benefiting the entire county, such as damage assessments.
Wiggington stated Summers was out assessing damage in the Martin area, after the January tornadoes, as well as the May 3rd and 4th storms. “It looks like we’re going to get a presidential declaration of disaster for those,” Wiggington said. “TEMA is going to be requesting FEMA to review that for us.” He added, because of Summers’ diligent efforts, Martin stands a good chance of getting reimbursed for their cost for the May storms.
“He works closely with all of the cities in the county, which is a big help to us,” Wiggington said. “Mr. Summers also assists in the maintenance and deployment of EMA’s cascade/rehab equipment that is used by Fire Departments across Weakley County.
“Deputy Director Summers reflects great credit upon himself and the Weakley County Emergency Management Agency,” Wiggington said. “His selfless acts, impeccable integrity, and dedication to the citizens of Weakley County are an inspiration to us all.” 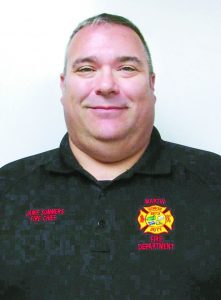