BY DAVID FISHER
david@dresdenenterprise.com
GLEASON (May 14) — The possibility of installing a splash pad at Snider Park in Gleason was a major topic for discussion, during Thursday night’s meeting of the Gleason City Board.
The board heard from Sandy Hickey, office manager for BAM-2, a water and wastewater specialist company located in Gleason that has worked on turbines and other equipment for numerous municipalities throughout West Tennessee.
Hickey, who worked for Goodwill for 10 years in the area of public relations, networking, grant writing, and helping people find jobs, stated since she started working for BAM, she has discovered there is a lot of opportunity to give back to the community. She stated the local business wishes to partner with the city on certain projects.
“We want to improve the park system,” Hickey said. “We want to put in some type of waterworks system, such as a splash pad, which typically costs $150,000 or more.” Hickey stated BAM-2 installed the water park for Martin and Union City, and is in the process of installing a water park for Paris, which will be the largest in the United States.
She stated there is a Local Parks and Recreation Fund (LPRF) grant available for parks. “They will match whatever we can come to the table with.”
The Parks and Recreation Committee and Downtown Revitalization Committee, working in concert with BAM-2, could begin working on the grant, which is a 50/50 grant.
Hickey stated the mission of Brent Summers, who is the owner and president of BAM-2, is to give back to others. “He is the one who is spearheading that we should be a part of the community and make things better,” she said. “He came up with a couple of drawings for an activity area that would be efficient, effective and very durable.
“We really have to look at your budget to determine what you can maintain,” Hickey said. She also mentioned BAM-2 assisting with fundraising and grant applications for a park project.
“I think the ball is in your court to see if you want to jump on this venture,” Hickey said.
She stated the prime location for a splash pad would be Snider Park, where there are other activities to draw people in. “When the kids get hot playing on the playground, they can cool off at the splash pad,” Hickey said. She suggested locating a splash pad west of the Memorial Wall.
While BAM-2 would assist in raising the money for the project, she noted the city would be responsible for upkeep and providing water for the splash pad.
The board voted to look into procuring a grant, but not proceed with applying it, until more is known about the proposed project, particularly the cost to the city.
In department reports, Police Chief Eddlemon said, “In the beginning, it was very hard for us to find masks and things if we had to go into a situation where COVID-19 was active.” He stated Charles McAbee, the owner of Custom Car Care, donated masks to make sure the officers are protected. These are similar to paint masks with filters on the side.
Mayor Poole stated she is hopeful the city’s park program will open in June for all of the local ball teams.
Under concerns from the aldermen, Radford stated some of those contacted about tearing down their dilapidated houses complied with the city’s instructions, while others have started to demolish their houses, but have not completed the work. Those who have done as they were asked and tore down their houses “feel like they’ve been picked on,” Radford said.
The mayor stated Chief Eddlemon, who doubles as the city’s code enforcement officer, has sent out more letters.
“We need to proceed on,” Radford said.
Alderman Jerry Dunn, Jr. commended Gleason First Baptist Church and all of those that helped with a recent food drive to help the community. “In my opinion, the way I was raised, that’s what the church is for.”
“About 300 people came through, and they provided enough food for about 800 people,” Mayor Poole said. “They also gave away about 40 bibles.”
Casey Hood, candidate for State Senate, introduced himself just before the meeting drew to a close. 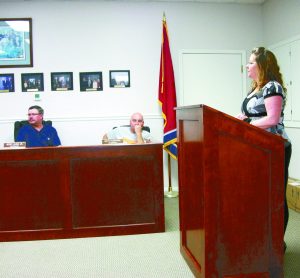 Sandy Hickey, office manager for BAM-2, a water and wastewater specialist company located in Gleason, stated the local business wishes to partner with the city on certain projects.