MARTIN — Add Pomp and Circumstance to the list of things some area students are missing during the COVID-19 closure. While Weakley County Schools will observe socially distanced graduations during the weekend of June 12, some students will already be on their way to what’s next.
That includes Westview’s Mason Whitten who was left for boot camp at Paris Island, South Carolina, on Monday. Principal Jeromy Davidson worked with Mason and his mother, Amy McCord of Martin and father, Lance Whitten of South Fulton to ensure the Marine recruit would at least get one more day on campus, wearing the cap and gown and switching the tassel from right to left. He stopped by Westview Friday morning for a brief photo session and to receive congratulations from Davidson and School Board President Steve Vantrease along with School Board Member John Hatler.
Though Mason’s departure date was postponed, he expects to leave within the month and was glad to have the diploma in hand.
Asked why the 18-year-old chose the Marines, Whitten acknowledged he saw the military “as a way out.”
Everybody has something they want to do in their life, something that’s going to take them somewhere and this is my way,” he said. “I also wanted to make my parents proud. I didn’t know what I was going to do, so this is going to be my way to show them I got this.”
Mason moved to Westview during the middle of his sophomore year. He had previously attended Fulton City High School.
Currently, other enlisted seniors will still be in the county for the June 12 weekend of ceremonies. Weakley County Schools Director Randy Frazier has said that any member of the Class of 2020 who, due to military commitments, cannot attend graduation will be welcomed home and celebrated at a significant event when school resumes. 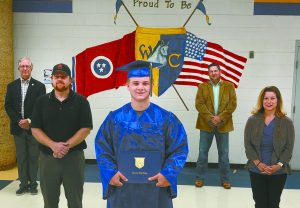 SOCIALLY DISTANCED RECOGNITION — Mason Whitten was scheduled to be in boot camp in South Carolina when his fellow members of Westview’s Class of 2020 receive their diplomas on the weekend of June 12. To ensure that he got the opportunity to don the cap and gown, Principal Jeromy Davidson invited the Marine recruit and his family to a brief photo shoot on campus and included Weakley County School Board members Steve Vantrease and John Hatler. Seen in the socially distanced photo are front Mason Whitten, father Lance Whitten, mother Amy McCord, Vantrease and Hatler.