BY DAVID FISHER
david@dresdenenterprise.com
MARTIN (April 13) — The City of Martin held two formal meetings during the month of April, instead of having an informal meeting on the first Tuesday of the month and a formal meeting on the second Monday, as they have for many years. Both of these meetings were held via the internet using Zoom, which can be accessed on the city’s Facebook page.
Although board members were at different locations, they managed to interact with one another and vote over the internet using an application known as Zoom.
“Meeting electronically is necessary to protect public health, safety and welfare in light of COVID-19,” Mayor Randy Brundige said.
During the first formal meeting on Tuesday, April 7, the Martin Board of Mayor and Aldermen unanimously approved the low bid in the amount of $710,111 submitted by Ford Construction for widening Martin Industrial Drive.
Mayor Brundige said the bid for the project is within budget. He added it will be paid for, thanks to a 100 percent grant from Delta Regional Authority, which requires no local matching funds.
Alderman Danny Nanney asked if there would be any work on Highway 22 with this grant.
Mayor Brundige replied “no,” the road will be widened on Industrial Park Drive down to the bridge.
In other business, the board accepted the resignation of Tommy Legins who serves on the Public Works Committee.
In a letter to the City of Martin, Legins states:
“I am writing tonight to resign my position on the City of Martin Public Works Committee, effective immediately. This decision is due to a conflict of interest, as my firm will be performing the audit for the City of Martin. I have enjoyed serving on the committee for many years. If you have any questions regarding my decision, please feel free to contact me.”
Mayor Brundige ended the meeting by cautioning everyone to remember social distancing in order to flatten the curve of the coronavirus.
During the second formal meeting held via the internet on Monday, April 13, the mayor informed board members concerning the status of major city projects.
Mayor Brundige said the Martin Library project is coming along nicely. He mentioned that delays were mainly because there were 27 days of rain during the month of March. “They could work some, but not all day, due to the wet weather,” he said. Now that there are fewer rainy days, the construction company is in the process of erecting the steel framework of the new library.
Regarding the sidewalk construction project on University Street, adjacent to the campus of UT Martin, Mayor Brundige noted he received a letter from the Tennessee Department of Transportation stating the sidewalk project is essential and work should be allowed to continue. “Since there are no students at UTM, due to classrooms being closed because of the COVID-19 virus, they have been able to work continuously without delay,” he said. Mayor Brundige stated the project involves tearing out the old sidewalks and installing new sidewalks.
The board voted to install Tree Board Committee members. The 11-member committee now consists of the following: Ashley Kite-Rowland, president; James Wick, vice president; Dr. Greg Moore, secretary; David Rowland, treasurer; Guy Robbins; Earl Wright; Marilucile Counce; Justin Crice; Chris Mathis; Aaron Rowland; and Carmen Pendergrass.
In announcements, Mayor Brundige stated Tennessee Gov. Bill Lee extended the stay-at-home order until April 30. He added the governor will give a more detailed update on the status of schools on Wednesday.
“During the month of May, we have some new things coming,” the mayor said. He stated one of the changes involves doing away with the old ordinances regarding the issuing of beer permits and replacing them with a single, concise ordinance.
Mayor Brundige mentioned the planning commission has not been able to meet, but plan to before the May City Board meeting.
The next formal Martin City Board meeting is 5:15 p.m. on Tuesday, May 5 and will be conducted over the internet by utilizing Zoom. However, if the coronavirus ban is lifted before that time, it may be held in the City Courtroom and open to the public. 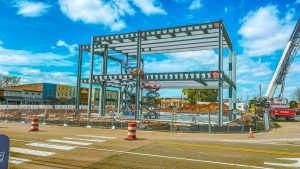 Although there have been construction delays because of rainy weather, Martin’s new library project is well underway. During Monday night’s city board meeting, Mayor Randy Brundige commented the steel framework of the building is going up and he is well pleased with the progress now being made.