BY DAVID FISHER
david@dresdenenterprise.com
GREENFIELD (April 7) — Weakley County citizens have long awaited the reopening of a popular local eatery, after being closed for several years.
Wimpy’s Corner restaurant, a long-standing Greenfield landmark, has been resurrected. Wimpy’s, located at 218 North Front Street in Greenfield, which closed its doors in 2013, has undergone extensive renovation inside and out.
Jimmy Shelton, who owns and operates the business, says, due to the ban on in-house dining brought about by the COVID-19 epidemic, the restaurant is currently only serving drive-up customers. Nevertheless, he said business has been booming.
He states the days and hours of operation are fluid at present and depend upon the amount of business he receives. However, he notes, once the coronavius stay-at-home ban is lifted, and in-restaurant dining is allowed once again, he plans to open at least Thursday through Sunday and possibly Wednesday. At that time, he anticipates hiring 12 full-time and about half as many part-time employees.
“I bought it two or three years ago and did a complete remodel,” Shelton said. The inside is super nice with handcrafted tables and bars made out of California redwood. We tried to keep everything old inside. We kept the original wood. We just reworked it.”
The exterior of Wimpy’s is reminiscent of the original design and color scheme. Additionally, the windows are decorated with the artwork of local artist Drew Porter, whose depictions of the lovable cartoon charters Wimpy, Popeye, Olive Oyl, and Brutus. Life-sized figures of Wimpy, Popeye, and Brutus came off of a 2000 Madi Gras float. Drew Porter purchased them at a Nashville arts show. He then cleaned and sealed them and painted the background piece.
In addition to buying the building, Jimmy also purchased the secret recipe for the famous double Wimpy Burger. He says by using only fresh meat and produce when making the burgers, he gets a lot of compliments and repeat customers. The Wimpy Burger comes in three sizes – a half-pound junior burger, one-pound regular burger, and a huge two-pound double Wimpy Burger.
This is not Jimmy’s only restaurant. He has been co-owner of Shelton’s Restaurant, located at 4460 US Hwy 45 in Sharon, for the past 10 years. Jimmy states, even though the dining room is closed, customers can call in orders for a full menu every day.
Wimpy’s Corner Restaurant first opened in 1993 and was owned and operated by Bobby Pentecost. The second owner was Randy Potts, who sold the business to Shelby Pitts. Mitch and Vicki Grub were the next owners operating Wimpy’s. Mitch purchased the building next door, which was a lawnmower repair shop, owned by J.W. Higgs. Mitch cut a hole in the wall separating the two businesses and installed a door, in order to expand the restaurant’s dining area. Lastly, the restaurant was purchased by Jimmy Shelton. 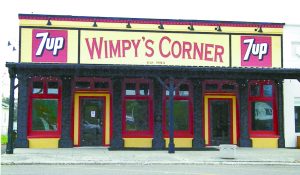