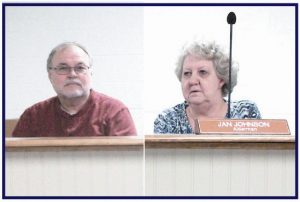 Two Greenfield alderpersons submitted their letters of resignation, which were read aloud by Mayor Cindy McAdams, during the Tuesday, Aug. 13 meeting of the Greenfield City Board.

Shane and Jan Johnson submitted separate letters outlining their reasons for resigning from the board. Essentially, the couple cited conflict with certain board members as being the reason for them to resign their positions.

Mayor McAdams said, “I’m sure you are aware Shane and Jan Johnson are resigning from the board.”

In order to fill the two vacant positions, the mayor nominated Karen Campbell to fill Jan Johnson’s position on the board and Mike Caudle to complete the remainder of Shane Johnson’s term as alderman.