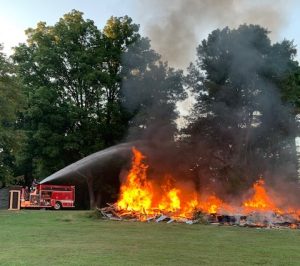 Dresden firefighters wet down the foliage around an old house that was intentionally being burned by the owner over the weekend, to prevent the flames from spreading to a nearby wooded area.

A weekend blaze at a house located in rural Weakley County resulted in the Dresden Fire Department being dispatched to the scene; but upon their arrival, the firefighters discovered everything was not as it first seemed.

“It turned out to be a controlled burn of an old residence located in the front yard of the owner’s home,” Chief Hutcherson said. “It hadn’t gotten out of control, but a passerby called it in. It was a large fire, but it was contained. However, I can see how a passerby would be alarmed by what they saw.”

Chief Hutcherson stated the firefighters contained the blaze to make sure it didn’t spread into the adjoining woods, or damage the nearby power lines.