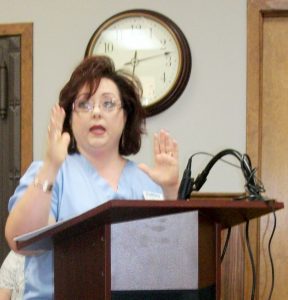 Dresden resident Lisa Harris Markle addresses the board concerning drug activity and theft that occurred next to her property on Greenfield Hwy. 54.

The Dresden Board of Mayor and Aldermen heard from a concerned citizen regarding the city’s drug problem, during Monday night’s regular monthly meeting.

Under input from citizens, lifelong Dresden resident Lisa Harris Markle addressed the board concerning drug activity and theft that occurred next to her property on Greenfield Hwy. 54. Markle stated, during the last three years, she has made numerous calls to Dresden P.D. concerning drug deals being conducted next door to her home and has not received a very good response.

Markle said she moved from the property in April of 2019, due to the drug activity. “I planned on renting out the property, but I couldn’t see putting somebody else through what I’ve been through the last three years.

(See complete story in the Aug. 7th issue of the Dresden Enterprise.)