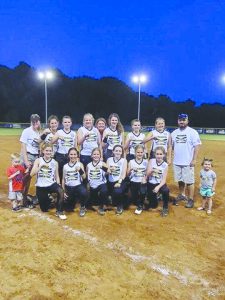 Over the past two weeks the Dresden’s Wilson Park has been the home for District and State tournaments for softball and baseball youth teams from all over West Tennessee.

Four teams competed in the 6U tournaments; three teams in the 12U tournament and for the Little League Minor baseball tournament a total of seven teams were vying for the Championship title.

(See complete story in the July 3rd issue of the Dresden Enterprise.)