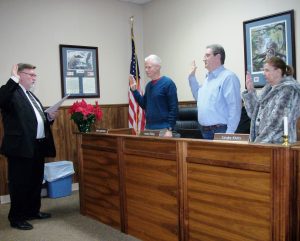 Members of the Dresden Board of Mayor and Aldermen, who were recently re-elected, were sworn in during Monday night’s meeting by General Sessions Judge Tommy Moore. They are (l to r): alderpersons – Gwin Anderson, Lyndal Dilday and Sandra Klutts.

As Monday night’s Dresden City Board meeting got underway, General Sessions Judge Tommy Moore swore in those board members who were re-elected in the November 6 General Election, namely Mayor Jeff Washburn, and alderpersons – Gwin Anderson, Lyndal Dilday and Sandra Klutts.

Mayor Washburn said of their term in office, “It’s been a good four years. I have enjoyed working with you during this time. We may not have always seen eye-to-eye on everything, but in the end, we have been able to work through things for the good of the City of Dresden.

He stated, after reviewing progress the city has made with City Recorder Jennifer Branscum and city department heads, they came up with a list of accomplishments that have improved the city’s infrastructure and livability over the past four years

(See complete story in the December 5th issue of the Dresden Enterprise.)